13 July, AtoZForex – The 2017 cryptocurrency bull run has lost some of its steam in early June. Prior to dropping in value, Bitcoin price has hit the record high above $3,000, with Ethereum climbing above $400.

Cryptocurrency market rally is over?

As of now, many could say that the cryptocurrency rally is over. As we are already two weeks into July, the market outlook for digital currencies looks even worse. Almost all top cryptocurrencies have entered the bear territory. The researcher at Coindesk, Alex Sunnabourg, has shared a very insightful chart that shows the drops in Bitcoin’s value along with other currencies’ values since the beginning of July.

As you can notice, Bitcoin was not the worst performer. Some of its smaller counterparts have performed much worse. The Bitcoin has declined 6.5%, while Ether has dropped 29%. Ripple has depreciated 39%. 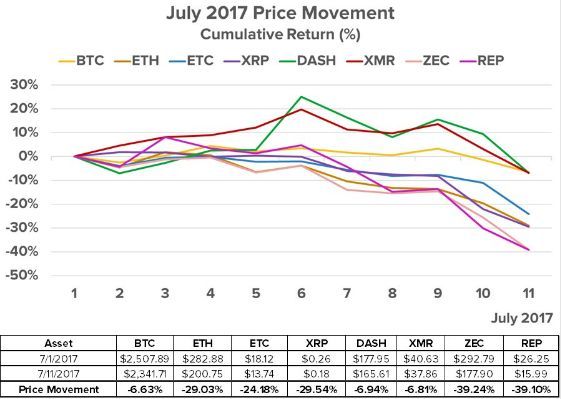 The average cryptocurrency prices decline accounts for approximately 22.7%. In addition, the market capitalization of Bitcoin now stands at $40 billion, with the one of Dash at $1.3 billion.

The latest performance of cryptocurrencies raises the question of what is causing them to drop so drastically. Moreover, market players now speculate whether the prices have reached the maximum low or will decline further.

Earlier price jolts in the highly volatile cryptocurrency market were caused by particular external shock. It could be the hacking attack or a regulatory crackdown. However, this time, we did not see any of these happen.

In one of my previous articles, we discussed that the digital currency market crisis is getting worse. Presently, there are three main battling fronts – SegWit, SegWit2x and Bitmain’s UAHF. All of the above-mentioned represent the proposed updates to the core Bitcoin’s core. They aim to improve Bitcoin’s operating system, while they focus on different Bitcoin technology issues.

A lot of the industry observers note that this is a challenging period in the history of cryptocurrencies. However, in spite of the current crypto battle, some of the investors still hold on to the digital currency market.

Moreover, some of the industry experts believe that the July cryptocurrency drop is a result of the bubble inflated by numerous speculators. Additionally, many of them state that Ethereum has already hit the bottom. If we look into the latest performance of Ether, we notice that the price of the coin has started to climb up. As of now, the price of Ethereum stands at $215.18, signaling an uptrend from the low of $192.

However, the market sentiment is now mixed. While some choose to listen to the BlackRock’s view that suggests that cryptocurrency is a bubble, others are being more positive. Just like that, Blockchain technology has been granted an acceptance from one of the financial giants – Goldman Sachs. One of the US biggest banking institutions has created a microsite specifically for describing the benefits of Blockchain technology.