According to the draft, individuals who reside in the country is not allowed to mine, generate, hold, sell, transfer, dispose of, issue or deal in cryptocurrencies directly or indirectly could face jail for up to 10 years time.

RBI officials said: “A decision on the launch of Digital Rupee would be taken after consulting the Reserve Bank of India (RBI).”

The draft bill for banning cryptocurrency has been in the process since a long time with Economic Affairs Secretary Subhash Chandra Garg leading the duty. Now, the strict law would be implemented to deal with people indulging in the trade of cryptocurrency. India is likely to have its own digital currency.

“A decision on the launch of Digital Rupee would be taken after consulting the Reserve Bank of India (RBI),” said an official.

Uncertainties about Cryptocurrencies ban is true or false

Despite this, it is still uncertain if the news about the crypto ban in India is true or fake since the Reserve Bank of India (RBI) recently denied having any knowledge about the government’s plans to ban cryptocurrency. The RBI’s stance was made known after Varun Sethi, a lawyer who specializes in the blockchain filed a Right to Information request to the RBI on May 7, 2019.

While responding to Sethi’s questions on June 4, 2019, the RBI said it did not receive any copy on the suggested draft bill and it has not communicated with the central government regarding any ban. Also, it has neither endorsed the decision to ban cryptocurrencies nor has it received any written communication that a government department is about to endorse it.

After putting a ban in cryptocurrencies, India’s anti-crypto bill might flourish Monero and Zcash in the country. This is because these coins will be hidden from the eyes of the government and thus giving individuals immunity from prosecution.

According to a recent tweet by CZ_Binance, the latest bill in India will really push privacy coin adaption forward. 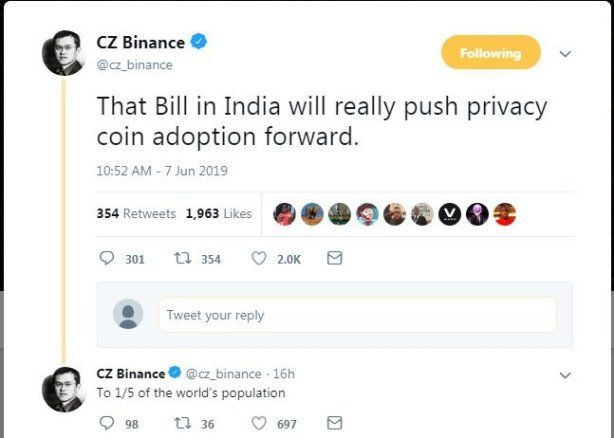 Transactions which involves Bitcoin and other non-privacy focused cryptocurrencies are not anonymous. This anonymity has especially been destroyed with the growth of blockchain tracking and analysis firms. These firms are used by others by law enforcement agencies in inferring the identity of individuals who deal with cyptos.

Bitcoin Marks a New Low of the Year Below $30,000
Forex Crypto
Top 5 Forex Brokers
Top 5 Crypto Exchanges
Your subscription could not be saved. Please try again.
Thank you for subscribing. You will be the first to receive all the latest news, updates, and exclusive advice from the AtoZ Markets experts.
Everyone is reading
SEC vs Ripple: Court Orders SEC to Disclose Its Cryptocurrency Policy
Can Ripple Break Below $0.55 Significant Event Level?
Ethereum Remains Below $2,100 Resistance Area - What Next?
close ×