May 21, 2019, | AtoZ Markets – According to the latest reports from the fundraising page BnkToTheFuture, San Francisco-based crypto exchange Kraken has raised over $6.5 million in a matter of days as part of a new equity sale.

Kraken partners with BnkToTheFuture for its next project

BnkToTheFuture is a global online investment platform that allows qualifying investors to invest in financial innovation including FinTech companies, funds, and other new alternative financial products.

Kraken CEO Jesse Powell, who described crypto exchange as one of the top 5 exchange platforms worldwide, was responsible for the BnkToTheFuture pitch. The crypto company has already passed its minimum threshold of €5,552,073 as of May 21.

Explaining Kraken’s collaboration with BnkToTheFuture and its fundraising initiative, the crypto exchange’s officials noted on Twitter: 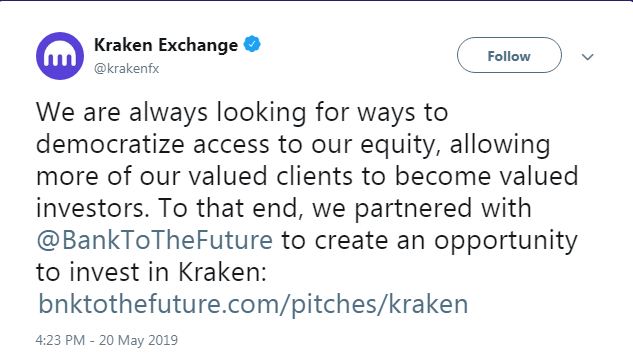 Kraken is not the first crypto trading platform that has been performing fundraising activities in recent months. Recently Atoz Markets reported about Hong Kong-based crypto exchange Bitfinex, which raised $1 billion in just 10 days. The firm collected money via an initial exchange offering (IEO) of Tether, a stablecoin operated by its sister company. The funds, Bitfinex raised will initially cover $850 million that was seized by the governmental authorities from the crypto exchange.

Significant enthusiasm toward exchanges has shown the Asian corporate sector.

In addition, Bitstamp a bitcoin exchange based in Luxembourg and South Korean platform Korbit could soon come under the direct ownership of Disney Corp. in case of a separate equity deal involving a giant $13.2 billion sum go ahead.

Such enthusiasm seems expected against the background of surging growth of the cryptocurrencies on the market in 2019.

However, in February, the Bitcoin price was around $3500, and the market analysts nonetheless revealed that the deposits on the five biggest exchanges combined still equaled less than 1 percent of those in JPMorgan Chase. Although 2018 and beginning of 2019 produced losses for some exchanges record on-chain volume in May 2019 provides ample opportunity for industry players to expand their profile.