Crypto exchange Cryptopia reopens trading. It has resumed just three months after it endured the theft of a multi-million dollar.

20 March, 2019, | AtoZ Markets – The New Zealand-based company has announced on its Twitter account that it is starting to list 40 trade pairs, which it “quantifies as safe”. 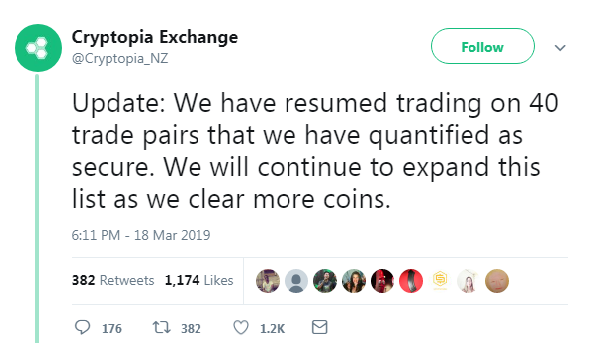 The cryptocurrency exchange also confirmed that it would periodically place more coins after evaluating each of them for potential abuse. At the moment, cryptos as bitcoins, doge and litecoin are among the major digital assets listed on the exchange. It was according to the details available on the official website of Cryptopia.

The latest Cryptopia statement followed the extreme hack accident that occurred in mid-January of this year. As a result of hack attack more than $ 16 million worth of Ethereum and other ERC20 tokens were stolen from the platform. The New Zealand exchange stated that he had lost 43.19% of his Litecoin and 14% of his bitcoin assets in the hands of hackers. Nevertheless, the attackers managed to erase all the stocks of Ethereum Cryptope, leaving the stock exchange without essential coins.

However, after Cryptopia announced a hack, Binance CEO Changpeng Zhao in his twitter announced that the global cryptocurrency exchange halted certain funds. That was stolen from the New Zealand crypto exchange. It suggests that could be bigger.

Among the victims of the attack were individuals who reportedly lost their savings as a result of the aforementioned hacking. After the Cryptopia reopened, some of the crypto exchange users complained about the loss of a certain percentage of their cryptocurrencies. For example, one of the Reddit users noticed that he had 15 percent fewer bitcoins than before hacking. Excerpts from his statement: “I logged in my account. And I got a 15% haircut for BTC. Heard eth has a haircut of 100%.”

However, Cryptopia office indicated that it would place the Cryptopia Loss Marker (CLM) in place of the missing funds. The exchange will use CLM as a means to assess the loss of an individual in the New Zealand dollar (NZD) after hacking. Earlier, Cryptopia has confirmed that it will start giving way to its customers through fair logistics. The exchange had said:

“CLM is not a coin. It is not tradable yet. It is just a number in the database. That represents the loss for each coin for each user in $NZD at the time of the event. There are still steps to take to ensure we are taking a legal path toward reimbursement.”

BitFinex crypto-exchange resorted to the same move, after losing $ 71 million due to hackers. After the theft in August 2016, the company distributed so-called BFX tokens to victims. In exchange, these customers had to wear a 36 percent bitcoin cut. By April 2017, BitFinex bought out all the BFX tokens.

Tags Cryptocurrency exchange Cryptopia hacker attack trading
Forex Crypto
Top 5 Forex Brokers
Top 5 Crypto Exchanges
Your subscription could not be saved. Please try again.
Thank you for subscribing. You will be the first to receive all the latest news, updates, and exclusive advice from the AtoZ Markets experts.
Everyone is reading
Top 5 Forex MT5 Indicators for 2021 you should try
Top 5 Cryptos to Watch in Quarter 2 2021
Bitcoin Facing Resistance Around $60,000 Event Area - What Next?
close ×