August 30, 2019 | AtoZ Markets – Fews days ago, after losing the lawsuit against a former business associate Kleiman, Craig Wright, the self-proclaimed Satoshi Nakamoto, and others may face a new class action for fraud and forgery.

Peter McCormack – a famous British podcast creator entitled “What Bitcoin Did” has revealed in a Tweet his intention to file a lawsuit not only against Craig Wright but also against Calvin Ayre and Jimmy Nguyen for declaring that Wright is Satoshi Nakamoto. 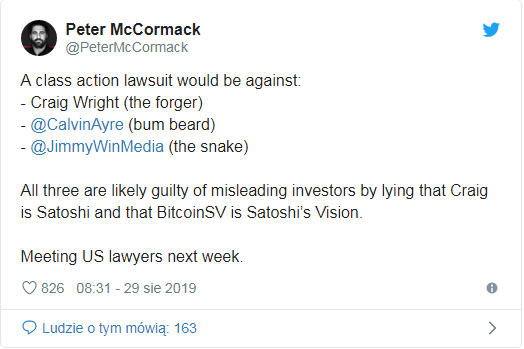 As a reminder, the judge’s ruling on Kleiman case on August 27 was somewhat based on the fact that Wright misrepresented and falsified all documents so as to hinder the work of the court that never believed him to be the real Satoshi Nakamoto.

Following the court’s decision, McCormac, according to his Tweet on August 28, decided to go a bit further by holding Wright and his friends responsible for spreading lies that the technology [ promoted by Wright ] is Satoshi’s vision whereas CSW is not the real Satoshi.” 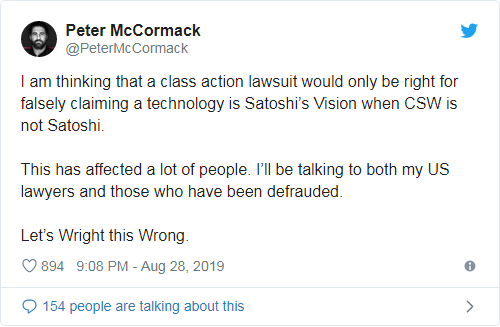 Wright launched Bitcoin SV stating that the cryptocurrency reflects the vision of Satoshi (Satoshi Vision), although he is not Satoshi at all. This according to McCormack has influenced the decisions of many people.

While some believe it is just a waste of time, many others in the crypto community have favorably welcomed McCormack’s proposal, with some even willing to support the initiative financially. 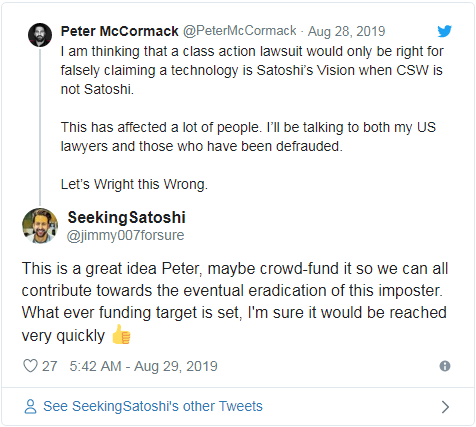 It is worth remembering that Craig Wright filed a defamation lawsuit against McCormick and its currently being waged in the UK. He also lodged a libel suit against Roger Ver, the CEO of Bitcoin.com for calling him a “fraud and liar” in a YouTube video. However, Craig lost the libel case due to lack of evidence.