14 March, AtoZForex, Lagos – The recent resumption of crude oil price rally is not as impressive as most think. This is the opinion of Jeff Currie, global head of commodities research at Goldman Sachs who opines that “the commodities market has set itself up for a self-defeating rally.”

Dollar in the driver's seat

In his view, the recent surge in commodity prices is premature, hence unsustainable, saying "I think there were three forces at play ... reflation, realignment and relevering." Currie believes the current oil market rally can be attributed more to the actions from the dollar as the expectation of the oil market rebalancing sparked a big rally recently, but those were mere presumptions. He explains that the dollar has been weaker, causing commodity prices to rise as people adopted the idea of central bank policy realignment.

Speaking of the potential deal between OPEC and non-OPEC countries to freeze oil output, Currie points out that OPEC's ability to run the cartel under a low oil price environment is limited by the "fast-cycle nature of shale." Another point to prove the Commodities self-defeating rally:

"Russia was already at peak production, Saudi Arabia was not going to invest anymore, so it was really no sweat for them to make this commitment," he noted, adding that Goldman doesn't see changes in fundamentals."Once the market begins to rebalance, we'll start to see evidence of a deficit and actually draws in inventory, then you'll get the green light to start to move higher," Currie said forecasting three to six months of volatility left.

The current oil prices are forcing all producers to freeze output and there will be a price correction by year-end, United Arab Emirates Energy Minister Suhail Al Mazrouei told reporters in Abu Dhabi. Saudi Arabia, Russia, Qatar and Venezuela agreed last month that they would freeze oil output, if other producers followed suit, in an effort to tackle a global glut. 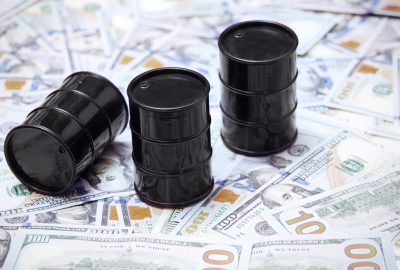 Read Here What is Happening with the Oil Production