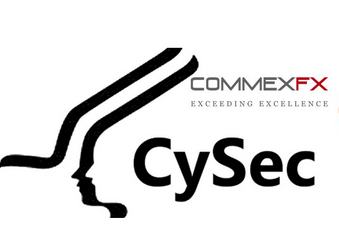 July 8, AtoZForex.com Lagos – New information has surfaced as regards to CommexFX and the dire situation it is in. Back in June, CySEC suspended the broker’s license based on allegations of violating of the required code of conduct, based on ‘Operational requirements – Clients’ funds’, and ‘Safeguarding of clients’ funds’. A few days back, the Cypriot regulators again slapped the company and its director with fines of €100,000 and €30,000 respectively.

The additional CommexFX CySEC fine was due to the fact that even after the license suspension and an order to pay off clients within two weeks, the broker has been having difficulties meeting this obligation. Client withdrawals have remained pending.

CySEC has also disclosed that this is not the first of such penalty imposed on CommexFX as similar steps were taken on the company a few years back. Further research now reflected some more suspicious dealings in the company’s activities as well as ties to another ailing firm, namely Merex markets.

The Rise and Fall

CommexFX began operations in January 2012. According to reliable sources, as of March 2015 the company had close to 40 employees and about 6,000 clients. Issues relating difficulty in client withdrawals started a few months back just when it seemed like the company was at its peak.

An interesting relationship has surfaced between CommexFX and Merex markets, a money management firm which appeals mainly to Arabian and Chinese clients. Abdalrahman Alimari, the CEO of CommexFX is also listed on Merex Markets official investors group on Facebook his social media profile as an administrator.

Merex Markets is a money management company. On its website, it claims that it applies “faultless system” to achieve returns from 7 to 12 percent per month. This information has now been removed. The new message goes thus: “Did you know an investment with Merex Markets would have yielded an extraordinary return of over 114% in 2012? Some may say that this is nothing but luck. However to repeat the feat with a return over 96% in 2013 is an incredible performance that would turned most hedge fund managers green with envy. Especially when we tell you that over a 24 month period the fund managers at Merex Markets did not have one signal losing month.”

This does not seem like a credible claim, because no concrete evidence of this performance was displayed, amongst other reasons. It is now understood that this firm as well is going through a liquidation process. Abdalrahman Alimari, CEO of CommexFX was rumored by the Egyptian news portal “youm7” to have been detained by Egyptian authorities over some of his dealings, although this has been denied by Mr. Almari. Could the demise of CommexFX have something to do with the liquidation of Merex markets? We continue to seek further information and clarification.