February 22, 2019, | AtoZ Markets – This week in Hanover, Frankfurt and Munich, the German banking and financial services company Commerzbank and the technology corporations Continental and Siemens have completed a test transaction as part of a pilot project to process a money market security between the companies using blockchain technology.

How it all started?

The deal between financial and technology corporations took place in January with a volume of 100,000 euros and a period of three days. Continental was the issuer of the money market security. Commerzbank provided the Corda-based blockchain platform and acted as a service partner. Siemens subscribed to the money market security as an investor. Corporate law firm GSK Stockmann provided legal advice on the transaction. Commerzbank announced about the successful completion of the experiment on its Twitter: 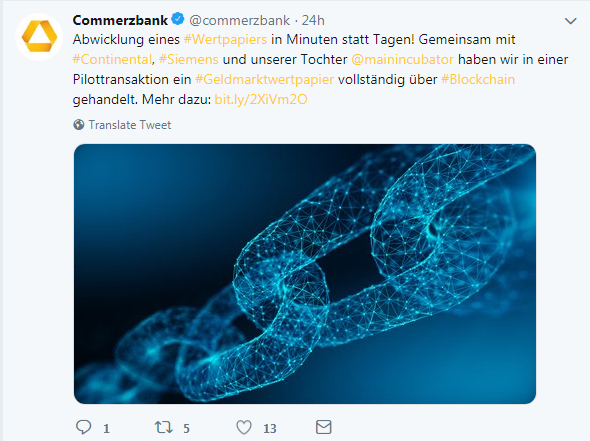 The security, which Continental issued, was in the form of a euro-denominated electronic commercial paper according to legal requirements stipulated in the Luxembourg law. The users on the Reddit reacted on the Continental, Commerzbank, and Siemens pilot project test with certain doubts and concerns :

The goal of the joint pilot operation, as Siemens and Continental explained, was to study the use of the blockchain for secure transactions. The transaction was initiated and settled between these two companies with Commerzbank acting as a platform operator and service partner. Corda blockchain platform that was used in the experiment is an open source blockchain platform that removes costly friction in business transactions. It enables institutions to make transactions directly using smart contracts. As the Commerzbank reports the companies not only generated the money market security but also processed the trade (including payment processing) in a legally binding manner using blockchain. The documents and funds as the German financial company reports, were exchanged in a matter of minutes rather than days using this process.

Money market securities are short-term assets that serve financial companies and usually have a maturity of one year or less. Usually, payment processing takes two days due to the cleaning process. It is reported that the platform based on the blockchain has allowed companies to increase the flexibility, efficiency, and transparency of the transaction. Speaking about the other benefits of the deal, Peter Rateb, corporate treasurer of Siemens noted in a recent press release:

“Significantly shorter bandwidth times and faster time to market show clear advantages of this technology. Key issues include security and performance issues, as well as legal issues, such as the need to create a single European standard and an understanding of the blockchain-based transaction law. “

The collaboration partners in brief

Commerzbank located in Germany, Frankfurt am Main with gross profit in 2018 reaching 8.6 billion EUR is a leading international commercial bank with branches and offices in almost 50 countries. In 2018, Earlier in late 2018, Commerzbank, in collaboration with the French corporate and investment bank Natixis and the Dutch financial services company Rabobank, completed the sale of commercial papers in the amount of 100,000 euros (113,340 US dollars) on the Corda platform. Commerzbank has developed a pilot trading structure, software, and network for Distributed Ledger (DLT), as well as regulatory guidelines.

Siemens is a global technology powerhouse and one of the largest producers of energy-efficient, resource-saving technologies. Last year, Siemens joined the scalable blockchain platform, the Energy Web Foundation (EWF), to promote the use of decentralized technologies in the energy sector.

What do you think? Let us know in the comments section below.