The newly released app announced on Monday uses Ripple’s cross-border payment technology xCurrent to facilitate the transfer of money to Thailand and the Philippines at low cost and increased speed of money transfers over traditional legacy systems. 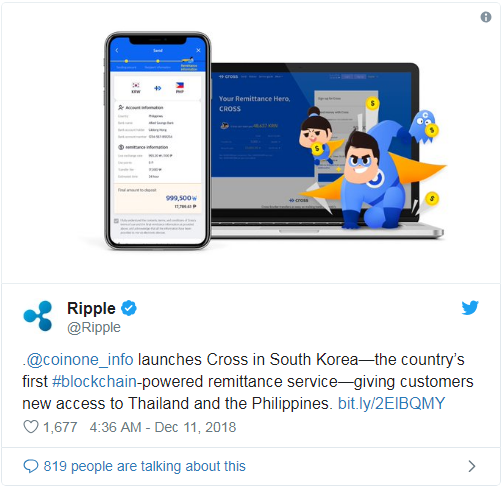 However, while this is great news for Ripple fans and XRP holders, the payment app does not utilize the digital asset XRP. Rather, xCurrent is a blockchain-based software that allows banks to settle payments with end-to-end tracking and a real-time messaging system without a need for the digital coin.

Meanwhile, Coinone will be working with Thailand's Siam Commercial Bank (SCB) and a financial institution called Cebuana Lhuillier in the Philippines so as to get funds to customers. Also, Cross users will be able to transfer their funds directly to any recipient with a bank account in Thailand via PromptPay app, which is powered by Mastercard.

Officials further stated that the reason for the partnership between Ripple and Coinone is to provide instant payment settlement service to two million immigrants of South Korea.

It is noteworthy that SCB was the first Asian bank to adopt Ripple’s leading blockchain network solution. SCB being one of Thailand's largest banks means that more and more payment providers can now integrate Ripple’s xCurrent technology.

Besides the collaboration with Ripple, the remittance blockchain giant, SCB which is affiliated with over 120 other banks and financial institutions around the world has made plans to expand their service across Southeast Asia soon. According to a recent blog post by Ripple, the South-Korean crypto exchange revealed:

With plans to aggressively expand across the region over the coming months, Coinone Transfer quickly rolled out the service through new financial institutions using RippleNet — connections formed with Siam Commercial Bank (SCB) in Thailand and Cebuana Lhuillier in the Philippines.

It is also worth mentioning that the new app could only launch due to South Korea changing their remittance laws. This opens a massive opportunity for companies other than banks to provide cross-border payment services in the country using Ripple’s xCurrent technology.

According to Coinone, there are about 2 million immigrants workers in South Korea — that’s 3.4% of the entire population. Out of these 2 million people, Thai immigrant workers comprise about 153,000 people and most have ties to their home country and need improved remittance services like Cross more than ever.

The World Bank has also estimated that approximately $17 billion in remittances into and out of the country happened in 2017 alone. Hence, Ripple stands in the right position to capture a significant number of these transactions if more payment apps like Cross implement Ripple’s xCurrent technology.