The largest US crypto exchange Coinbase bans right-wing political commentator polemicist, speaker, and writer Milo Yiannopoulos. Yiannopoulos announced this in a Gab post on May 3.

07 May, 2019 | AtoZ Markets – Yiannopoulos has previously made high-profile and controversial remarks. For that, different media platforms banned him.

In July 2016, Yiannopoulos was banned from Twitter due to “inciting or participating in insults and harassment to other users.” The reason was his attacks on the black actress Leslie Jones. Jones starred in the “Ghostbusters” remake. Milo Yiannopolous Tweets caused a flurry of insults upon Leslie Jones from other Twitter users.

Later, Facebook and Instagram banned Milo alongside other individuals such as Alex Jones and Louis Farrakhan. A Facebook spokesperson during one of his recent interviews explained that they have “always banned individuals or organizations. That promote or engage in violence and hate, regardless of ideology.”

“The process for evaluating potential violators is extensive, and it is what led us to our decision to remove these accounts today,” the Facebook representative concluded.

Who Is Milo Yiannopoulos?

Milo was born in the English county of Kent in a Greek and English family. He is 32 years old. Yiannopoulos studied English literature at Cambridge but did not complete his studies. From his youth, he was also busy with high technologies. However, he was one of the most influential IT journalists in the UK.

For a supporter of conservative views, in 2009, Milo settled in the leading British conservative newspaper, The Daily Telegraph.  In The Telegraph, Yiannopoulos got a large number of fans who liked that Milo didn’t interest in the opinion of authorities. He was prone to sarcasm and could infuriate opponents.

In 2011, Yiannopoulos quit the newspaper and founded The Kernel, his own IT tabloid, which was intended to “correct the mistakes” of high-tech journalism. Now the website closed.  Later Yannopoulos started his job in the American ultraconservative news platform Breitbart. That until recently was led by one of the most influential people in the White House, chief strategist Steve Bannon.

Yiannopoulos is a well-known political commentator and speaker who advocates conflicting far-right views and calls himself a “cultural libertarian.“

According to Milo’s post, after he registered on Coinbase, within three minutes, he received two emails, which allegedly confirmed that his registration on the exchange revoked. 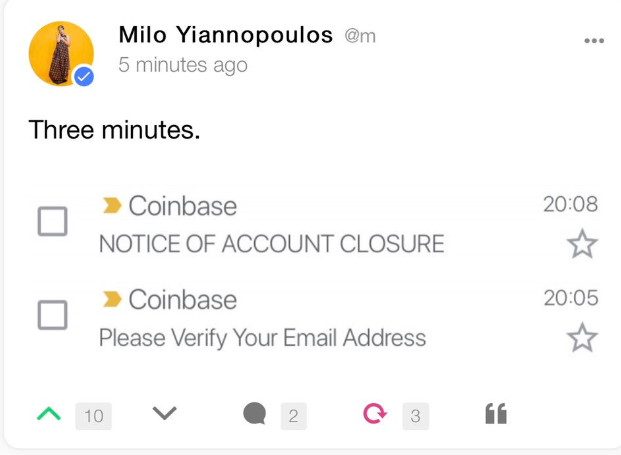 It seems complicated to determine why the Yiannopoulos account shut down. However, it is due to a specific ban on the controversial British journalist, or due to the registration process formalities.

Last April, the crypto exchange blocked the account of WikiLeaks Shop, the merchandising branch of the global anonymous platform WikiLeaks, due to terms of service violations.

In December, Julian Assange, founder of Wikileaks, urged donors to contribute to the online publication by using cryptocurrencies to skirt the financial ‘blockade’ by national governments.

It is worth to mention that Coinbase is sometimes taking controversial decisions that cause anger on social media. On February 19, 2019, the US crypto exchange announced that it hired the blockchain startup Neutrino team, a controversial surveillance vendor that caught selling spyware to governments.

However, after a wave of the crypto community’s adverse reactions to its new acquisition, Coinbase CEO Brian Armstrong made a public statement. He said the company is firing critical members of the recently-acquired security firm Neutrino.

Coinbase is one of the largest global crypto exchanges. However, it remains unclear how the act mentioned above of the company. Also, the possible responses of the crypto community could affect the future of this crypto-exchange.