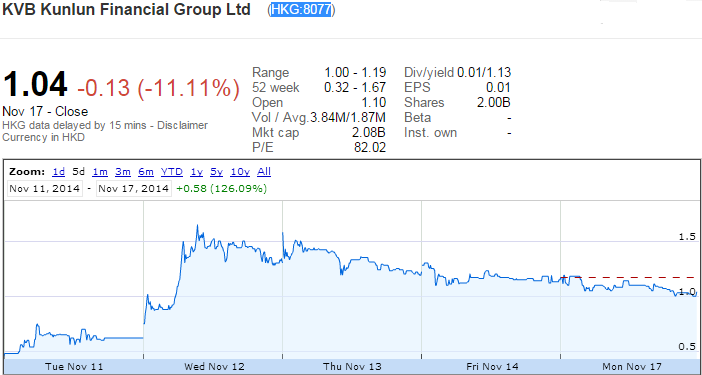 Negotiations have been ongoing since November 2014, as it was reported that there was a potential take-over bid for the Honk Kong based broker, KVB Kunlun. It was said that the potential acquires agreed to buy the firm for HKD 50 million, entitling it to “exclusive right to discuss a deal” for 70 days, the period of which came to an end on January 28, 2015. The agreement of a 60% stock sale was reached on January 29, 2015, KVB says, with the official offer by CITIC expected to be announced soon.

This deal will ensure that CITIC makes a complete takeover of the Hong Kong broker due to Hong Kong’s Takeover Code which states that; “an acquirer buying more than 30% of a company gives rise to an obligation for the acquirer to make a mandatory unconditional general offer for all the other company shares”. This has prompted the Chinese Investment Bank to make a general offer for all KVB shares, at terms “equal to or better than” it has agreed to pay KVB’s controlling shareholder Mr. Li Zhi Da for the 60% stake.

KVB is no doubt a lucrative target for investors, as the firm posted solid financial results as a result of improved volatility in the second half of 2014, which the firm estimates will be profitable enough to off set the disappointing results of the first half of trading in 2014.

This move is expected to boost CITIC’s stock value and market capitalization KVB shares traded at HK$1.41 before the temporary hold on trading, which is beyond CITIC’s HK$0.65 per share offer.