The United Kingdom is experiencing a period of chaos, due to fuel shortages, following the closure of some of its service stations due to a lack of fuel.

This has caused panic among the population, as many residents fear an uncertain and costly winter. After British Petroleum (BP) was forced to temporarily close some of its service stations due to a lack of fuel, the population began to form long lines to refuel their vehicles.

The current situation in Great Britain is the result of the lack of heavy load drivers in the country." We are experiencing fuel supply problems at some of our commercial stations, so, unfortunately, we have been forced to temporarily close a handful of stations," a BP spokesperson told EFE.

On the other hand, ExxonMobil's Esso said that some of its Tesco Alliance stores had also been affected by the situation. The pandemic, which has resulted in the closure of months of training centers for new drivers, is the "main cause" of the situation.

In social networks, the hashtag #petrolcrisis is a trend, while citizens share their problems to get the appreciated fuel.

What has the government said?

"We will move heaven and earth to do everything we can to ensure that the shortage of HGV drivers is reduced," Transport Minister Grant Shapps shared with Sky News.

In addition, he said people should avoid panic buying of fuel, as saturating stations that are indeed dispensing will only make the situation worse.

Likewise, many point out that the truck driver crisis is due to a combination of the covid-19 pandemic and Brexit. The transport sector says it has 100,000 vacancies that it has not been able to fill, noted BBC.

Thousands of drivers have not been able to take the tests to obtain their licenses. On the other hand, with the UK's exit from the EU, many European truck drivers have returned to their home countries or decided to do other things.

The British government claims there is no fuel shortage and that consumers should be able to fill their tanks as usual. However, a spokesman for Prime Minister Boris Johnson said, "We recognize the challenges facing the industry and we are taking steps to support them."

He also noted that the Department for Transport is making changes to allow drivers of heavy goods vehicles to obtain their licenses more quickly.

Oil prices have been rising for several weeks. The Brent benchmark is getting closer and closer to 80 dollars.

Market attention has focused mainly on gas and electricity prices in Europe. However, oil has sparked investors' interest. Brent crude has risen to the highest level in almost three years. The main reasons are a combination of spillovers from other energy markets and the global recovery.

However, prices are constrained by a faster normalization of production by OPEC+ some experts have said. 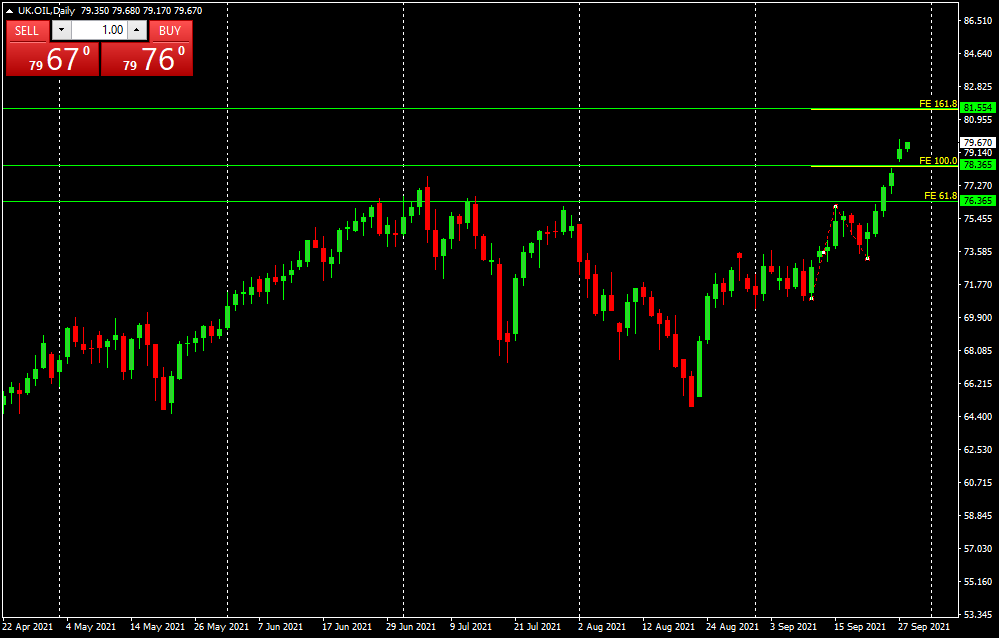 If we use the Fibonacci technical analysis tool and its extension, we can see that the $81 zone appears as the next target to consider. But for this to happen, the weakness of the dollar must remain in place. On the bearish side, meanwhile, the levels to be considered are $78.35, and $76.36 should be reviewed by investors. The price of Brent has risen more than 50% this year.

Oil Price Maintains Its Outlook
Broker of the month!