The Ontario Securities Commission (OSC), Canada’s financial regulator released a report yesterday, in regard to the results of its enforcement activities in 2014. The Canadian regulator continued to make targeted investments in its enforcement program in 2014, some of which include;

A total of 22 cases was commenced in 2014, 8 of which were commenced before the court. In 2013, 6 cases were brought before the court. In 2014, proceeds from monetary sanctions generated a total of $73.45 million for the OSC, $49 million of which came from disgorgement and the remainder from administrative monetary policies and settlements. This was 26% higher than the sum regulator received in 2013.

The OSC attributed the increased rate of success to higher investment in technology and stronger partnership with other arms of government. Moreover, in a comment provided by the CEO and Chair of the Canadian regulator OSC, Mr. H. Wetston pointed out the following; “The OSC has a stronger enforcement presence today because of more eyes and ears on the street, improved technological sophistication and significant alliances with police and other agencies. Through sheer hard work and dedication, OSC enforcement has become more vigorous and effective in protecting the interests of the investors and capital markets in Ontario.”

In order to provide a clear view upon the number of cases that has been appeared, the table below summarises the breakdown of the total proceedings that went down in 2014. 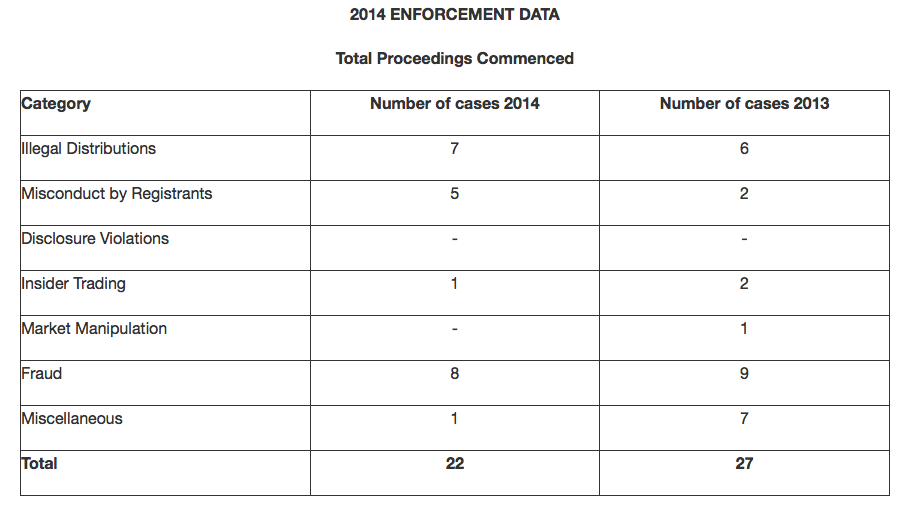