2018 marks the year of new stablecoins entering the crypto market. One of which is Paxos Standard, that has soared in market cap and got recently listed on Binance. Could Paxos Standard take over Tether on the long-term?

December 05, 2018 | AtoZ Markets - Tether was the main stablecoin that dominated the market in 2017, whilst this year the market saw more stablecoins entering the market to take away the market share of USDT. One of which is Paxos Standard (PAX), as Paxos Trust Company received the approval from the New York Department of Financial Services (NYDFS) on the 10th of September 2018. In fact, this was on the same day that the crypto exchange Gemini also received the approval of the NYDFS for its stablecoin GUSD.

Next to UDST, the stablecoin GUSD gained the second-highest average daily trading volume. One of the reasons why PAX received far less initial attention in comparison to GUSD, was due to fact that GUSD benefitted of the Winklevoss media blitz. Nevertheless, PAX has taken the spotlight in the market after its recent listing on Binance with 6 trading pairs pegged to PAX. Together with the strong growth of PAX, in terms of market cap, can this stablecoin dethrone Tether on the long haul?

The Predicament of Tether

Currently, Tether has a market capitalization of $1.8 billion, whilst once it even approached $3 billion. It is known that Tether has dominated the fiat landscape for a long time and is viewed by some as a systemic risk to the crypto market, due to the fact that it plays such an important role in Bitcoin price discovery, and that all other cryptocurrencies virtually derive their values from Bitcoin. The USDT token is one of the most controversial cryptocurrency assets, surpassing even ripple (XRP), EOS, IOTA, Tron (TRX), and even initial coin offering (ICO). Investors have argued over whether Tether and crypto exchange Bitfinex are operating a fractional reserve and using unbacked tokens to inflate the price of Bitcoin and prevent it from dropping below key support levels.

Additionally, the Commodity Futures Trading Commission (CFTC) and the Justice Department have opened investigations into whether Tether and Bitfinex have engaged in illegal activities. However, no enforcement actions have been made public as of the time of writing. Moreover, Tether has been aimed by hackers, and reportedly in 2017 close to $30 million worth of USDT was hacked. Hence, after reviewing the market of USDT, David Wells, the General Manager of Paxos began discussing in early 2018 about the launch of a stablecoin that operate as an alternative to tether.

The Emergence of Stablecoin Alternatives to USDT

According to Wells, there was “a lot of back and forth” and education sessions before the NYDFS gave their blessing to begin digitising dollars. As per Wells' comments: “They saw the need for a regulated stablecoin in the market.” However, why are these tokens more “regulated?”

The first reason is that issuers such as Paxos and Gemini must engage in more robust record-keeping and monitoring. The second reason is that they must adopt “risk-based controls” to prevent the tokens from being used as a tool for money laundering or other illegal activities. This also involves giving the issuing account the ability to freeze user balances and revoke tokens accounts linked with criminal activities.

While Gemini and Paxos are seeking to take down USDT, it seems they are not the only companies planning to do so. At press time, TrustToken’s TrueUSD (TUSD), which was launched earlier in 2018 is now the second-largest stablecoin, as it has grown its market cap to $182 million. In addition, USD Coin (USDC), which was launched shortly after GUSD and PAX, now ranks third with a $169 million valuation.

Seigniorage Style Stablecoins Are also up for the Challenge 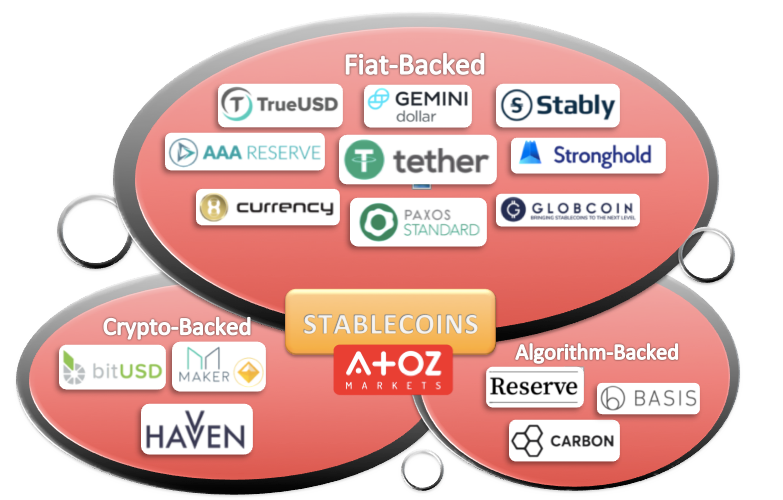 Also, there are algorithmic or seigniorage style stablecoins such as Dai and Basis. While these stablecoins are not exclusively backed by fiat reserves, they may be fully or partially collateralised by other assets. The smart contracts governing these tokens are automatically programmed to control the supply based on market demand.

This computer program can also increase supply when demand threatens to push its price above its peg as well as removing tokens from circulation when the opposite occurs. Above you find a selection of the different stablecoins out there in market. Beware, that this list is not exhaustive.

PAX and USDC Are in the Race to Overthrow USDT

While TrueUSD maintains an early-mover advantage, it seems that the quest to dethrone tether is becoming a two-horse race between PAX and USDC. These two stablecoins are rapidly gaining on TUSD and have so far left GUSD in the dust. Unlike Paxos Standard, the USD Coin is supported by Coinbase, along with Bitcoin unicorn Circle, and both are founding members of the CENTRE consortium, which oversee the development of USDC and future stablecoin offerings.

As a result, USDC is directly listed on the Coinbase platform, thus enabling the firm’s millions of users to easily convert between the token and fiat without having to open a new account. Whilst, tether remains in charge of stablecoin trading, PAX has continued as the early leader among its upstart peers to regularly outperform its competitors in both average daily turnover to market cap and velocity of money. 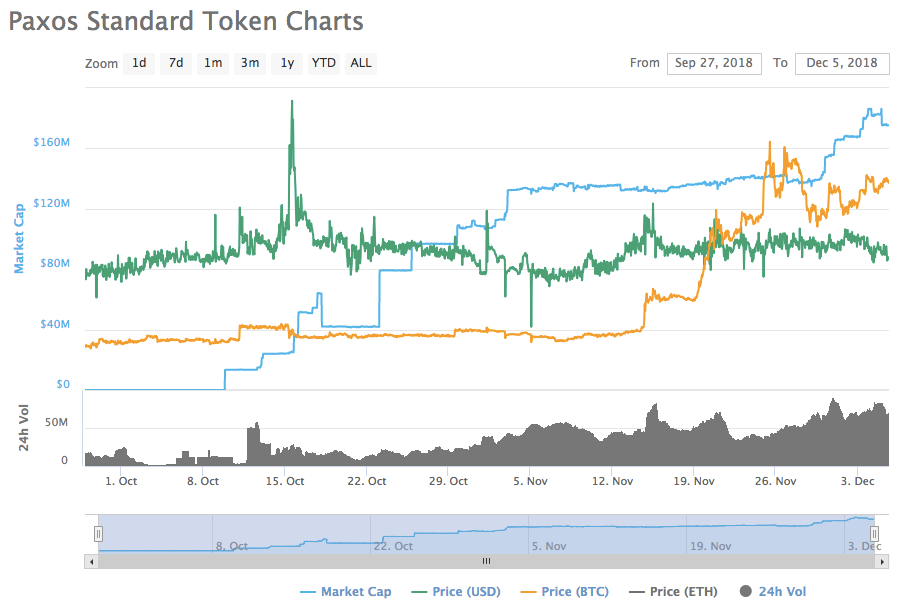 The General Manager of Paxos has explained that “one differentiator for us is the fact that we’ve had a global presence for the five years that we’ve been operating the company.” Wells noted that the firm’s crypto exchange has offices situated both in New York and Singapore. He also stressed that relationships with international market makers as well as exchanges, including the firm’s over-the-counter (OTC) desk, have helped PAX jumpstart the network effect and achieve rapid adoption of global venues.

Of course, stablecoins have a lot to offer than just trading, and issuers have outlined a number of potential use cases for these tokens. David Wells stated that right now, crypto traders are using PAX for both; conventional cryptocurrency exchanges and the firm ’s OTC trading desk. “It’s just a good alternative to fiat…We’ve heard from a lot of traders who trade across different venues that they just prefer PAX to cash”, Wells stated. Also, he noted that with stablecoins, traders can move funds across exchanges quickly without temporarily subjecting themselves to price volatility.

Meanwhile, USDC has been gaining pace over the past two weeks. Now, the gap has narrowed with several developments, providing USDC with a huge boost. The first is the USDC/BTC trading pair being listed by the world’s largest crypto exchange, Binance, thus providing the token with a significant liquidity boost. The second is, crypto exchange Poloniex — whose parent company is Circle — has become the first major trading platform to create a Bitcoin cash pre-fork futures market. It is worthy of note, that Poloniex listed the pre-fork tokens against USDC, but not tether, thus forcing traders to make use of Circle’s stablecoin if they wanted to use USD.

Why PAX Has an Edge Over USDC?

Despite the growth of USDC in the past two weeks, PAX still has a considerable edge over USDC. Its $305 million in seven-day trading volume is 140 percent bigger than USDC’s $125 million. Also, PAX is 10 percent higher than the more-established TUSD’s $277 million, in terms of trading volume.

Those statistics, however, don’t just show that PAX has achieved a leg up on its peers, but also demonstrate how much more work lies ahead, before PAX or any other upstart stablecoin becomes a credible threat to tether. Considering that tether's $25 billion in weekly volume remains more than 30 times as large as the weekly volume of PAX, USDC, GUSD, and TUSD — combined.

Tags Stablecoin Tether
Forex Crypto
Top 5 Forex Brokers
Top 5 Crypto Exchanges
Your subscription could not be saved. Please try again.
Thank you for subscribing. You will be the first to receive all the latest news, updates, and exclusive advice from the AtoZ Markets experts.
Everyone is reading
Is Forex Trading Halal or Haram in Islam?
Top 5 cryptocurrencies 2021 | Best Cryptocurrency To Invest
How to Setup Monero Mining in 2021?
close ×