CADJPY completed a triangle pattern as part of a bearish correction which could last for few weeks. What story does a triangle pattern tell on a price chart?. With the following CADJPY Elliott wave trade setup, we identify a triangle and a very likely bearish drive.

17 February, AtoZForex – The triangle pattern is one of the corrective patterns identified on a price chart. The Elliott wave triangle sub-divides into 5 sub-waves that are all corrective. It is also noted that triangles precede the last leg of an impulse wave or corrective wave (of any degree) before trend  correction/reversal or continuation. Triangles are also continuation patterns  most often. With the charts below and based on CADJPY Elliott wave trade setup, we identified a contracting triangle pattern.

The chart below shows how powerfully price broke out. The breakout completed an impulse wave upside labelled wave a. Wave b is expected to be a corrective wave and to end around 81.85-80.5. 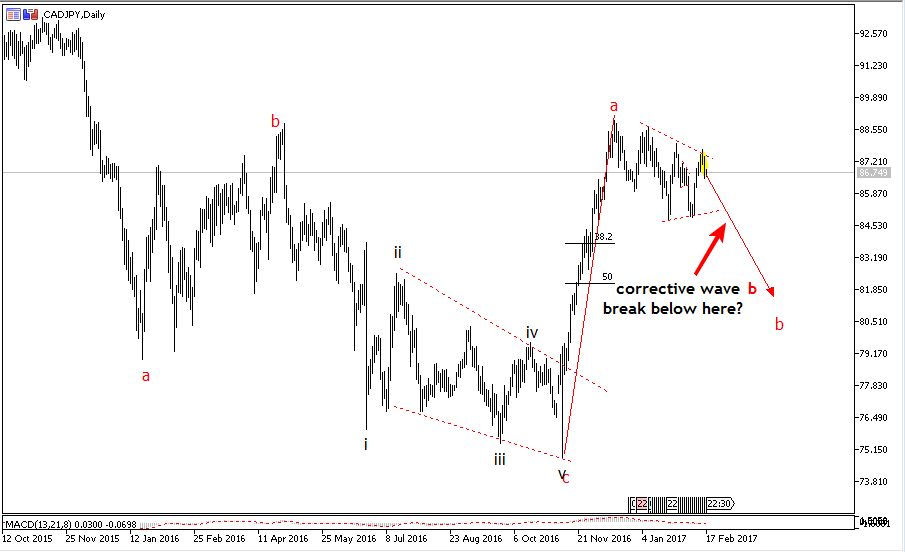 What corrective pattern is emerging for wave b? It looks like a triangle in the second leg of a double zigzag zigzag pattern on a lower time frame. The chart below shows the triangle pattern more clearly. 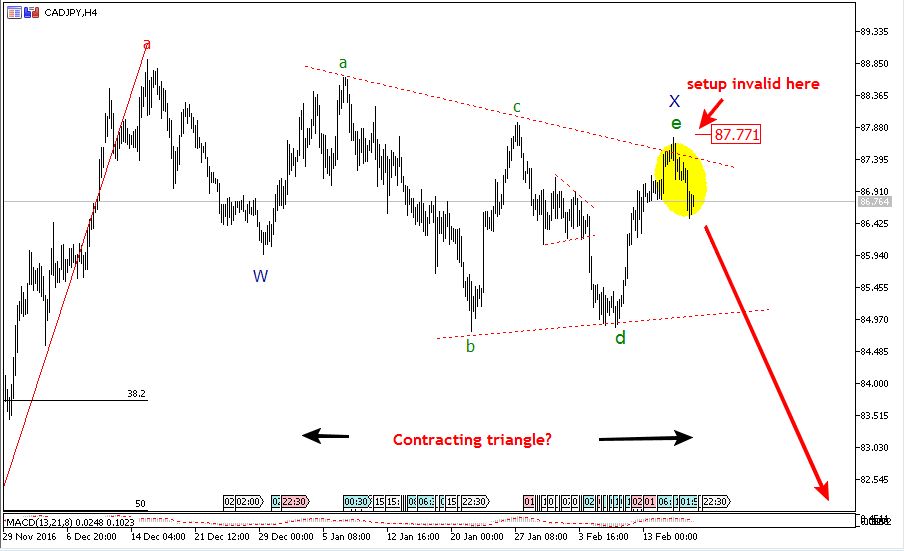 The correction expected downside is a double zigzag if completed as forecast. Double zigzag patterns are labelled w-x-y. w is a 5,3,5 zigzag pattern, x is any corrective pattern (zigzag, flat or triangle) and y is a zigzag. The chart above shows price completing a triangle-X after a zigzag-W. What next?. Price will continue downside to complete the double zigzag pattern. This is a classic setup that can give 1:4 or more in R/R. The setup is invalid above 87.77 and found on the H4 chart.

The Forex Calendar: Trends and News on AtoZMarkets

EUR/USD, GBP/USD, BRN/USD and BTC/USD 26 July Live Entry Points
Forex Crypto
Top 5 Forex Brokers
Top 5 Crypto Exchanges
Your subscription could not be saved. Please try again.
Thank you for subscribing. You will be the first to receive all the latest news, updates, and exclusive advice from the AtoZ Markets experts.
Everyone is reading
Is Forex Trading Illegal in India? Can Indians Trade Forex Legally?
XRP Skyrockets After Ripple’s ODL Announcement
Ripple Found Support Around $0.62 Price Area - Will Recover Upside?
close ×