Get VIP Trading Signals Market Watch
Trade Now Your capital is at risk.
November 20, 2018 | AtoZ Markets -This article is not supposed to be financial advisement but more a collection of personal views. However, you might find it useful, as it gives some refreshing insights.
If you following the market of digital currency, you might start finding weird and unusual shapes, scattered around various technical data. That gives a refreshing view on the market.

First of all, check on the market sentiment. It is an overall attitude of investors toward a particular security or a financial market. It dictates market behavior. To find out when it is a better time to sell or buy any securities or cryptocurrency, check google trends. People tend to check on Bitcoin the most when prices are at its highest. Because their decisions affected by their expectations for quick profits. It is beneficial to keep in mind that” before the thing gets better, it can always get worse.” And never fall for the typical lie, saying, that a continuous bearish sentiment will eventually drive prices upwards.

It is beneficial to follow smart-money and not to go against it. If you are going against the entire market, the chances you are going to lose are high, unless you know what to do. Here are three main tips on how to play against the market:
a) Baron Rothschild is an 18th-century British nobleman and member of the Rothschild banking family. He used to say that "the time to buy is when there is blood in the streets." It is one of the main rules of contrarian investing. According to this rule,  the worse things seem in the market, the better the opportunities are for profit.
b)"Buy the rumor, sell the news." It is a phenomenon that happens in most financial markets. It is news about changes in tax laws, military conflict, or the publication of financial statements. The news can be unexpected and expected, while traders cannot foresee the first ones, the second ones can. Rumors precede most of the news: “an unnamed source in the government reports ...”. “According to the interlocutor of the publication ...”. “They say on the sidelines of the forum ...” and so on.

c)“Buy when there is fear, sell when there is hype.” When investors are worried about bankruptcy, the upcoming financial crisis, or inflation, they want to dump their stocks as soon as possible. By fear, they sell their shares. That means if you buy stocks when investors are most worried, you get the same shares for a substantially undervalued price. Companies regain confidence after the threat of losing money fades away. Undervalued stocks could start increasing towards more realistic, much less fearful, valuations. So buy when there is fear or rumor, sell when there is hype or news.

You need to balance between different variables to understand the overall status of the Bitcoin market and see the big picture. There might be a possible correlation between the hashing algorithm difficulty adjustment and the Bitcoin price swings. Difficulty shows how hard it is to find a hash below a given target. The Bitcoin network has a global block difficulty.
It changes every 2016 blocks depending on the time it took to find the previous 2016 blocks. At the rate of one block each 10 minutes, 2016 blocks would take two weeks. The difficulty is reduced if the last 2016 blocks took more than two weeks to find. If it took less than two weeks to see 2016, the difficulty will increase. The hash must be less than the target to find a block. There are two hypotheses about several miners and its correlation with the Bitcoin prices:
(a) The more miners leave, the less energy needed to mine each block, so the easier it gets to mine Bitcoin.
(b) The less energy is required to mine each block, and the fewer are the costs.
That might translate into substantial price swings. But those price swings unlikely go upwards every time if you consider that both investors and Bitcoin miners are leaving the market.

Out of 20 richest Bitcoin addresses, four have had the very first UTXO created either in 2016 or 2018. UTXO is an unspent output from bitcoin transactions. UTXOs are processed continuously. They and are responsible for beginning and ending each transaction. After getting the transaction confirmation, spent coins are removed from the UTXO database. More than 50% of all top 100 richest Bitcoin addresses have been created within the last two years. There’s a lot of people with a lot of money invested in Bitcoin. And they can potentially start a race, which might affect the Bitcoin price, which dropped today below the $5000 level.
A hash rate growth is one of the most critical metrics for any cryptocurrency success. Hashrate describes the amount of mining power. Users throw that at the network. Check on the fundamental drivers in the cryptocurrency market that affect the costs of production. Also, look at the potential reversal of this negative difference for signals of reduced selling pressure. It will help to understand the dependency of the Bitcoin hash rate growth more clearly. 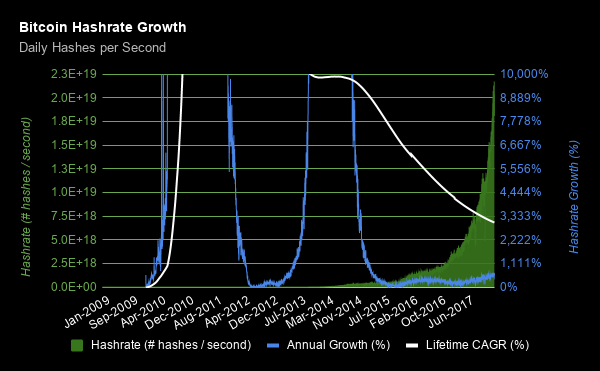 How Does the Private Sector React to Bitcoin and Blockchain Technology? 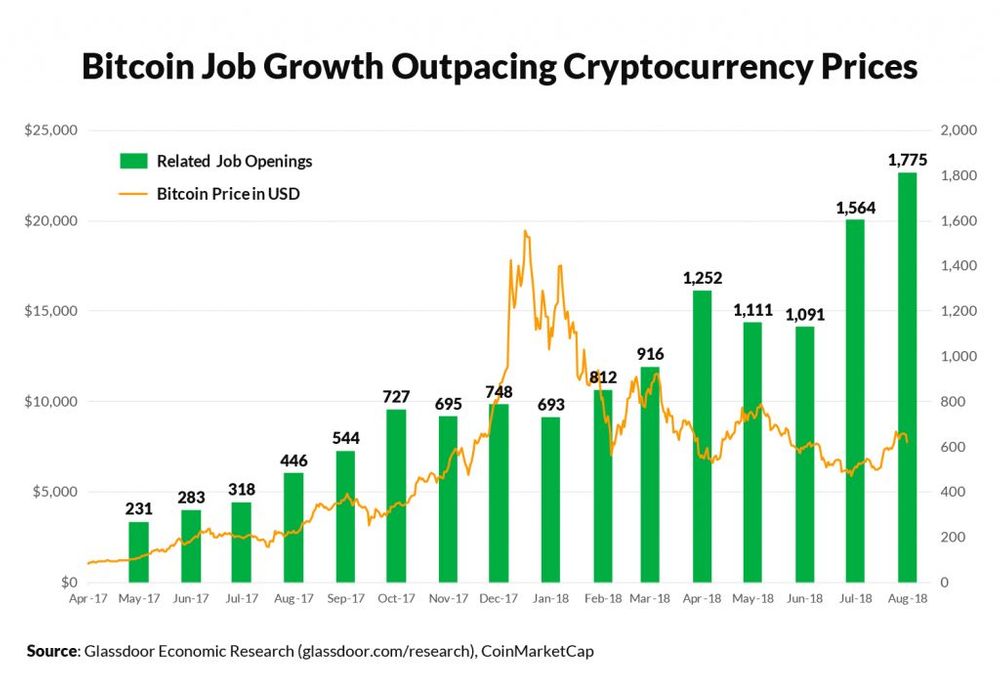 Another critical measure to understand is how companies are reacting to Bitcoin and the blockchain technology. There is little correlation between blockchain-related jobs and Bitcoin prices. Even though Bitcoin's price keeps falling, the companies and businesses remain confident of the crypto market. They continue to make long-term investments in their companies, hire more people involved in the cryptocurrency industry.
Even though the crypto market cap is down 70%+ from its highs, blockchain-related job openings in the US. It showed a 300 percent increase over the same period last year.