Indian festival Gold demand kept the bullion prices stable, as the experts say that flows into exchange – traded funds is an extra reason for steady gold. Will the yellow metal be headed higher?

26 October, AtoZForex – The prices of bullion are steady on Wednesday, as the firmer demand for the gold is expected ahead of the festive period in India.

Approaching Dhanteras and Diwali festivals have increased the markets’ expectations for the demand for gold, as the US dollar steadiness is offset. The physical demand for the yellow metal is about to increase due to the tradition to give gold as a gift on the period of the festival in India. James Steel, HSBC analyst has stated:

“A recovery in physical demand provided the foundation for the rally that carried over into later trading. Gold investors brushed aside the negative impact on bullion of a firmer USD.”

Trading Doc, the Forex analyst from AtoZForex, believes that the investors should exercise caution ahead of the US approaching elections:

“We are into the season of goodwill starting with Diwali going into Christmas and New Year. Gold prices have been bullish from the end of Oct to mid to end of Feb. Traders can look into buying Gold ETF’s without holding the physical metal. However, trade cautiously with the USA Presidential result to be officially declared.” 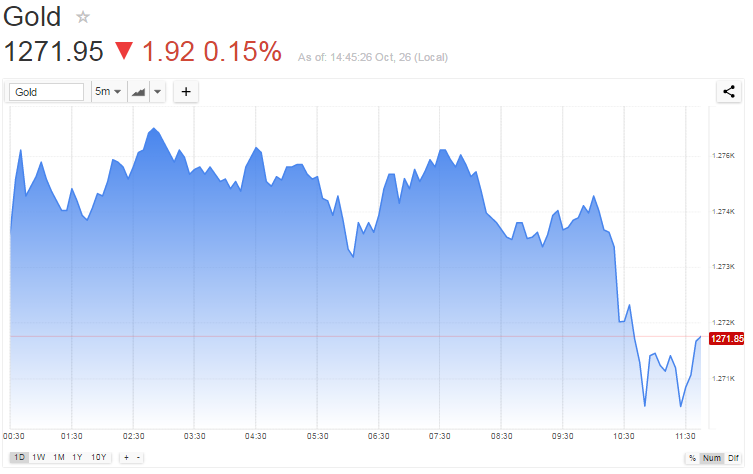 Dominic Schnider from UBS Wealth Management believes that the gold was kept stable by the flows into exchange –traded funds and the increase in Asian demand. He added:

“Markets having already priced in the Fed’s interest rate hike move. Yellen may hike rates now, but the trajectory is going to be very modest, and so interest rates in the U.S. in real terms will actually go down into more negative territory.”

AtoZForex’s FX analyst, Trading Doc, has commented on the current state and the expectations of the bullion prices:

“Beginning of December 2015 price rebounded from a monthly support of 1045-40; on the weekly chart if there is a clear break of 1375 would confirm a strong bullish move; On the daily, clear break and price respects the retest of 20sma above the 1277 level, expect possible move to the upside testing levels 1333 and 1343 levels.”

Governor of the Bank of England (BoE), Mark Carney triggered the wave of expectations for further monetary stimulus in EU region, where the ECB Chairman Mario Draghi stated that he would prefer not to keep the low rates for long period. Jason Cerisola, MKS PAMP Group trader commented:

“The extreme longs on Comex have been reduced significantly providing upside support for the yellow metal and potential for another assault on $1,300.”

Spot gold has the potential to grow towards $1,292 per ounce, in case it breaks the resistance level of $1,273.