Bitcoin has bounced off the $10,000 psychological level once again. The following analysis is based on the Elliott wave theory.

August 28, 2019 | AtoZ Markets – The cryptocurrency market continues the selloff as the market shed more than $50 billion since the August dip started. Bitcoin for the third time in just four days is bouncing off the $10,000. This time around, however, price bounced to $10,270 and now quickly dropping back to $10,100 at the time of writing this report. A break below $10,000 is close as August ends all-bearish.

Earlier this week, price bounced to $10,600 which now stands as the nearest resistance level. Above this level are the $10,900-$11,100 resistance zone and the $12,300 resistance level which seem far-fetched at the moment unless a sudden bullish spike happens. Bitcoin will most likely continue deeper to test the $9,750-$9,500 support zone and eventually the $9,100 support level after it breaches the $10,000 psychological level.

From the Elliott wave perspective, Bitcoin is expected to go deeper. After the bullish resurgence from December 2018 ended at $13,900 in late June 2019, the bearish move that has followed looks corrective. The corrective pattern is emerging into a double zigzag pattern which by extension might hit the $7,200-7,500 price zone. The chart below shows the long term wave analysis covering the end of the 2018 bearish phase and the 2019 bullish phase. 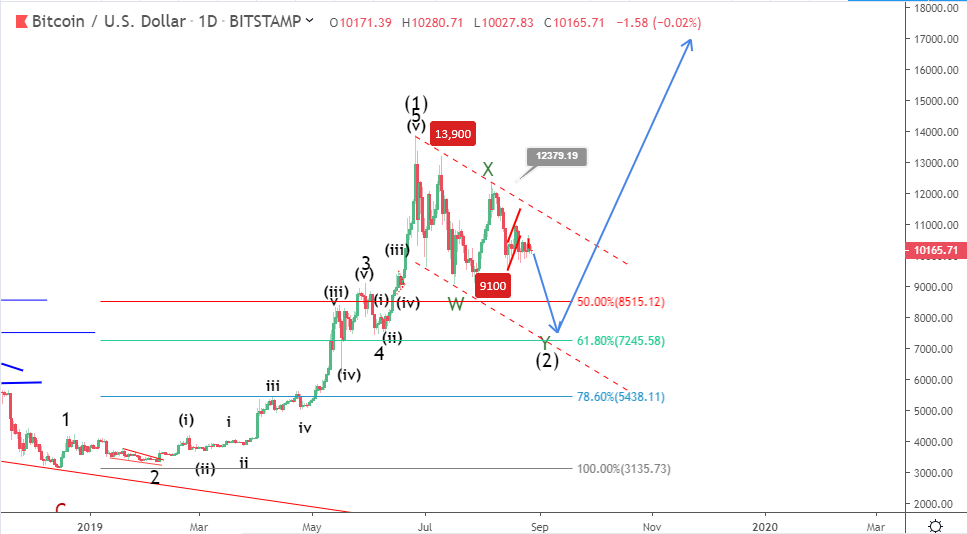 The chart above shows a gradual price pattern development which will look attractive to investors. The volatility is quite normal. This shows that BTC has become a proper asset that can be viewed from the binoculars of technical analysis like other traditional assets. After the 2018 bearish trend, we expected a bullish impulse wave breakout above the $19,800 all-time high. Price is emerging exactly as expected. A 5-wave rally to complete wave (1) of this impulse wave ended at $13,900. Wave (2) is currently emerging and might extend to the 50% or 61.8% Fibonacci retracement of wave (1) at $8,500 and $7,200 respectively. Unlike most Altcoins, Bitcoin correction is more restricted and doesn’t look like one that will run riot to lower prices. At the end of wave (2), wave (3) should push above $25,000.

Meanwhile, in the last update, we looked at the short term development of wave (2) with the chart below. 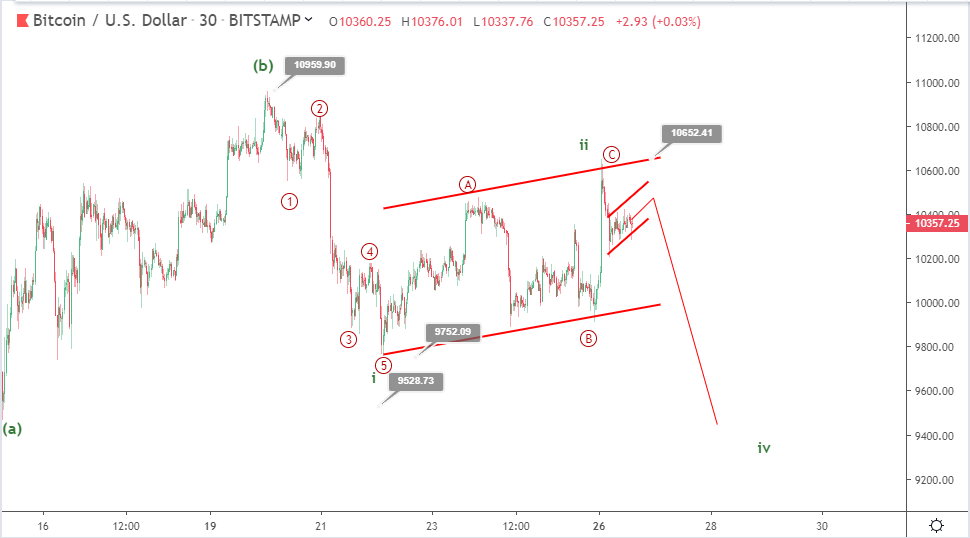 Price has dropped to toward $10,000 and is expected to break below to $9,500 and $9,100 in the last days of August or in the first week of September depending on the market volatility. Will there be a big surprise? It will be interesting to see.