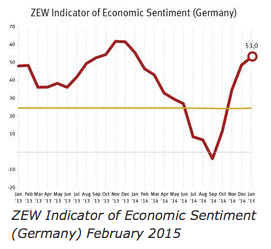 U.K’s annual Consumer price index dropped to 0.3% in January, data released yesterday showed as British inflation hits record low. This came in line with economist’s forecast, improving from 0.5% in the previous month, marking a record low level, as it hits the lowest point reached since 1989 when the records began and is likely to drop even further. This is a lift to the ruling government as elections approach, causing a boost to voters disposable income. The fall can be majorly attributed to the fall in oil prices and lower food costs. Finance minister George Osborne welcomed the figures seen as a boost to consumer spending power following years of weak wage growth and coming at the nick of time as elections are just three months away. The German ZEW Economic Sentiment reached its highest level since February 2014, as the indicator increased for the fourth consecutive time. Released at 53.0, falling a little short of forecast of 55.0, but better than previous of 48.4. New Zealand’s Global Dairy Trade Price Index showed an increase from last month’s 9.4% to come at 10.4%.

Japan’s Monetary Policy Statement released early this morning reflected that the BOJ will conduct money market operations so that the monetary base will increase at an annual pace of about 80 trillion yen. This will be done via purchases of Government bonds, exchange-traded funds (ETFs) and Japan real estate investment trusts (J-REITs), as it was noted that Japan’s economy is expected to continue its moderate recovery trend.

At 9:30 am GMT, U.K’s Average Earnings Index 3m/y, a measure of change in the price businesses and the government pay for labor, including bonuses is forecast for 1.7%, in line with the previous release. Claimant Count Change also known as “jobless claims” will be released on Wednesday, forecast for -25.2k. MPC Official Bank Rate Votes is expected to stay fixed at 0-0-9, in line with the previous vote pattern.

Canada’s Wholesale Sales m/m is expected to show a 0.4% change in the total value of sales at the wholesale level. This will be closely watched as it’s a leading indicator of consumer spending. Due at 1:30 pm GMT.

Later today, U.S Building Permits will be due for release, forecast to show an annualized number of new residential building permits issued during the previous month at 1.08M, a slight increase from 1.06m in January. Also, Producer Price Index m/m is estimated to show a -0.4% change in the price of finished goods and services sold by producers in the previous month. At 7:00 pm GMT, the all important FOMC Meeting Minutes will be released as markets will be watching to see if the Feds maintains their positive stance on the economy, as well as further hints as to when to expect interest rate hike which is anticipated to take place sometime this year.

New Zealand’s Producer Price index is forecast to show a 0.2% change in the price of goods and raw materials purchased by manufacturers. This could mark the best results since Feb 2014.