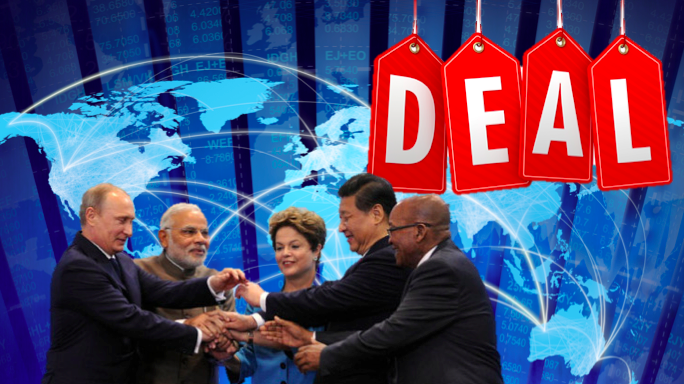 21 July, AtoZForex.com, Vilnius – The BRICS countries have launched a new bank on Tuesday in China’s commercial hub of Shanghai, the official Xinhua news agency reported. The BRICS group consists of Brazil, Russia, India, China and South Africa, and their “BRICS New Development Bank” has been seen as a contender to the Washington-based International Monetary Fund and the World Bank.

The opening, announced in a short report, comes two weeks after the BRICS summit hosted by Russian President Vladimir Putin. At the time of the meeting, Russian Foreign Minister Sergei Lavrov noted in a statement that BRICS “illustrates a new polycentric system of international relations” showing the increasing influence of “new centres of power”.

The BRICS bank management would be “working on initiation of operations,” including “making business policy” and “developing project preparations” Xinhua quoted one of India’s bank president K. V. Kamath. Further adding that the operations would begin late this year or early in 2016.

Moscow views the bank and a BRICS currency reserve pool (a $100-billion reserve fund, aimed at shielding BRICS from short-term liquidity pressure, promoting greater financial cooperation and issues of a strong dollar) as an alternative to international financial institutions such as the IMF and World Bank, which are dominated by the United States. It is not a challenge to other multilateral agencies, further noted one Chinese analyst. “It’s a complement, instead of a challenge, to existing international institutions,” Li Daxiao, chief economist of Yingda Securities, told AFP.

Aside, the world’s second-largest economy – china is also leading the setting up of another new multilateral lender, the Asian Infrastructure Investment Bank (AIIB), which will have its headquarters in Beijing. China will be the biggest AIIB shareholder at about 30%, according to the legal framework signed at the end of June by 50 founding member countries, in which the US and Japan respectively declined to participate.

Tags BRICS China IMF World Bank
Disclaimer: The views and opinions expressed in this article are solely those of the author and do not reflect the official policy or position of AtoZ Markets.com, nor should they be attributed to AtoZMarkets.
Author
Edmundas Povilavicius
View author profile
Everyone is reading
Breaking: Monash University COVID19 Breakthrough drug kills virus within 48 hours
Santander Bank to Launch Ripple-powered Payments Solution in Mexico
Can Gold Make it Higher towards $1700 Price Area?
Sign up for our newsletter
THANK YOU FOR SIGNING UP!