Brexit negotiations concerns weigh on the Sterling, while USD is supported by market expectations that Trump will fuel the US growth. What is next for GBP?

29 December, AtoZForex – USD reached its highest level versus the Pound on Wednesday, as markets worry about next year’s Brexit talks. Moreover, the optimistic view on the US growth has supported USD.

The pound dropped as much as half a percent to $1.2201, marking its weakest level since 31st of October. The UK is experiencing social unrest in relation to the Brexit negotiations, which are taking place in 2017. This October, the Prime Minister of the UK, Theresa May stated that she will trigger Brexit process by the end of March.

Moreover, market expectations that Donald Trump ‘s administration will boost the growth of the US provided additional support for the USD. The dollar index, which is measuring the USD against a basket of six major currencies, gained 4.7 percent in 2016 so far. Te biggest part of these gains came after the US elections on the 8th of November. 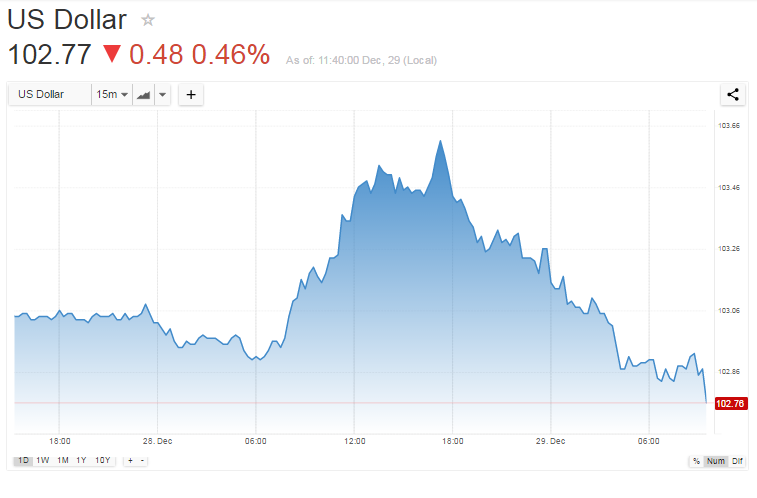 The president and chief investment officer of Palo Alto, California-based Merk Investments, Alex Merk believes that “This is just a continuation of the trend” USD strength. He further stated that trading volumes were weak post –Christmas. Mr. Merk believes that upcoming Brexit talks have weakened the GBP.

Additionally, the EUR dropped as much as 0.8 percent versus the greenback to an eight-day low of $1.0372. Following on this, the USD has slid against the Japanese Yen, trading at 117.21 Yen, down 0.15 percent.

A number of analysts believe that there is another source for common currency’s weakness. The rise in the European Central Bank’s (ECB) forecasts of how much extra capital will Italian bank Monte dei Pachi di Siena need weighs on the EUR. A strategist with HSBC in London, Dominic Bunning, has stated:

“Our case is that there’s probably a bit more room for (the dollar) to run.”

The common currency remained weak versus the USD, although contract to buy previously owned US houses dropped in November to the lowest level in almost a year. National Association of Realtors reported yesterday that the figures for Pending Home Sales m/m came at – 2.5%. Prior to the release, market consensus stood at 0.6%.