19 January, AtoZForex.com, Amsterdam —Aside the current global worries on China, declining oil prices and other ongoing issues, the recent Twitter outage affects the FX industry in a different way. As the global online social media platform experienced a total outage this morning of about 2 hours, after reports of serious access issues. The social network considered some changes lately, contemplating the removal of the 140-character limit. At the moment the online social media platform is operating properly again.

Aside the current global worries on China, declining oil prices and other ongoing issues. The recent Twitter worldwide outage affects the FX industry in another dimension. As a great number of Forex services are relying on the social media platform for daily operations, namely Forex brokers and traders are dependent on Twitter for the interchange of analytics and trade information. Alongside, the market sentiment analysis tools are also heavily dependent on information gathered from social media.

Something is technically wrong

At the time of the twitter visitors were unable to access the social network page, the visitors received the following message “something is technically wrong”. Similar for the mobile and tablet users, the message stated by Twitter encompassed the following: “Thanks for noticing. We’re going to fix it up and have things back to normal soon.” 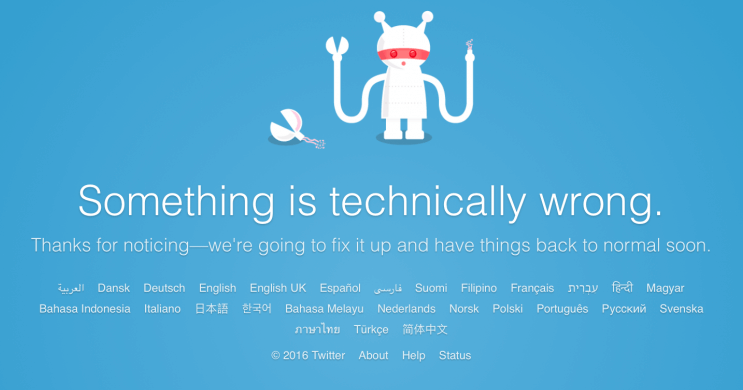 Timeline of incidents and disruptions

In more detail, the access to the social network failed initially over the web, API and mobile. Reportedly by the Guardian, at 8:20am GMT, Twitter released error messages warning that their network is both experiencing an “over capacity” as well as enduring an “internal error”. At 8:47 GMT, Twitter’s search API got announced with “performance issues”, and later on 8:55am GMT, the second API was announced to “performance issues”. By this time, only some Twitter users were able to access the social media.

By 9:00 GMT the status board of Twitter signalled and confirmed the outage, meanwhile the social media’s developer-facing monitor team stated that four out of five public APIs faced were suffering a “service disruption”. Around 10:00am, the majority of Twitter’s operations returned to some normality again.

Evidently, the Twitter outage affects the FX industry. Yet, what has been overlooked is that today’s Twitter outage is actually the third outage of the social network in the past days. The previous incidents were short, about 10 minutes each in comparison to today’s two hours outage. The first was recorded yesterday, the 18th of January, while the second outage was recorded on last Friday, the 15th of January.

CySEC Launches New Rules to Regulate Crypto Assets
Forex Crypto
Top 5 Forex Brokers
Top 5 Crypto Exchanges
Your subscription could not be saved. Please try again.
Thank you for subscribing. You will be the first to receive all the latest news, updates, and exclusive advice from the AtoZ Markets experts.
Everyone is reading
The Legal Battle Between the SEC and Ripple Continues
Binance Cancels Cryptocurrency Trading in Australia
Dogecoin Crashes and Bitcoin Market Awaits Fed's Meeting
close ×