11 April, AtoZForex, New York – Since April 07 of this year ACFX’s (Atlas Capital FX) CySEC license has been suspended for a month, as the month has passed it appears that now the company has decided to announce bankruptcy and go for a possible acquisition.

Based on the information AtoZForex has received from former ACFX employees in Cyprus, the company has fired most of the staff or pushed them to resign voluntarily. According to one of the former ACFX employees we have talked to even the management have resigned last month and there were only a few key personnel left when she was forced to leave last week herself.

“Most of my colleagues resigned voluntarily, but those who did not were terminated with the end date as April the 29th and was handed over their termination letters last week.”

This is indeed not the first time ACFX goes in trouble as we have information that the company has had previous risk management related issues. But this time, the fault is bigger than they can handle. Based on the info we have, the company has been a victim of the loop created by their low swap trading environment which was not forgiven by those “traders” looking for opportunities.

The issue here though is not just about the risk management mistake, but the management delaying the process to cut the risk off when it was its starting point. Such vital failure to make a decision has not only ended up with the company losing its operational license but also damaging the brand name.

What will happen to ACFX?

Based on the information AtoZForex has received from reliable sources close to the company, ACFX is ready to announce its bankruptcy and go through liquidation process.

In addition to the above, one of our sources commented that ACFX management are in a process for acquisition discussions with other firms. We have tried to reach the ACFX via email as well as phone, however we have failed to receive a decisive answer from the company about the future of the company.

Acquisition of ACFX might indeed be the reason for the company to put most of its personnel resources to the withdrawal process as well. 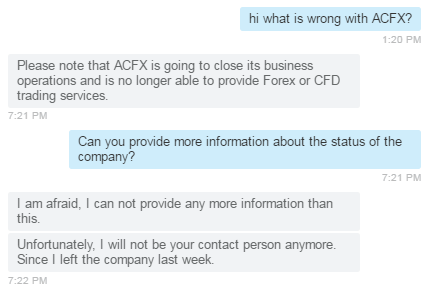 What will happen to my funds?

Is ACFX closed?Although we are still lacking a formal information from the company about ACFX future, we have some strong indication that traders should expect to see ACFX closed or acquired by another Forex broker.

Those traders with funds at ACFX should be safe based on the information that we have. According to AtoZForex resources, traders with funds will receive their withdrawals on time and accordingly as the company segregated their accounts. THERE IS A BUT!

It is likely that the company will not be issuing any witdrawal for those who appears to have abused ACFX terms & Conditions, bad part is that even the ICF would not help for those if they are pleaded guilty.

ATTENTION: AtoZForex.com has requested official information from ACFX, however there has not been any information provided yet. The above information is a part of our investigative reporting mostly with former company employees.

Crypto.com Signs Lucrative Sponsorship Deal with Paris Saint-Germain
Forex Crypto
Top 5 Forex Brokers
Top 5 Crypto Exchanges
Your subscription could not be saved. Please try again.
Thank you for subscribing. You will be the first to receive all the latest news, updates, and exclusive advice from the AtoZ Markets experts.
Everyone is reading
Bitcoin Is on the Verge of Collapse – Glassnode
Ripple Could Settle with the SEC Under One Condition
Binance Cancels Cryptocurrency Trading in Australia
close ×