29 March AtoZForex, Amsterdam — It has just came under AtoZForex’s attention that the Cyprus based forex broker ACFX started an investigation into the accounts of its Chinese clients. Today, the CySEC regulated foreign exchange broker has sent out a letter to its Chinese clients, clarifying that their trading accounts will be screened, which results into possible ACFX Chinese withdrawals delays.

In more detail, the investigation of ACFX into the Chinese clients’ accounts involves risk-less arbitrage. As a number of Chinese clients have utilized the swap rates on oil contracts to make unfair profit on their trading accounts. Hence, the forex broker felt necessary to take action and filter out its exhaustive list of Chinese trading accounts.

ACFX reassures its clients in China

Due to the possible ACFX Chinese withdrawals delays, a number of Chinese clients have expressed their worries. Added on this stress, according to local news press the offices of ACFX in Shenyang and Shenzen were closed today. In response, ACFX has done all it can to reassure its clients in China. Building further on this, a spokesperson of the forex broker has stated publicly:

“Due to recent incidence of clients in China abusing the trading platform in order to benefit from the swap rates on oil contracts, the company has decided to filter out all accounts in order to identify those who abused the system. Due to the large amount of trading accounts being affected this causes a slowdown and delay in the accounting department process.”

After the decision of ACFX to start screening all the Chinese trading accounts, earlier today the CySEC regulated broker has sent out the letter below to its clients: 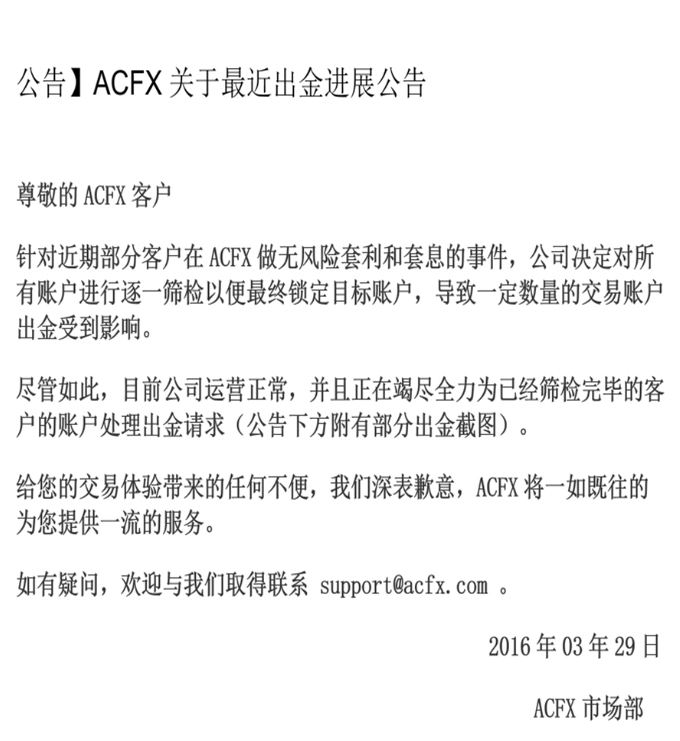 Click on the image to zoom in on ACFX's client letter

In summary, the issued note of ACFX to its Chinese clients earlier today, explains that the forex broker decided to screen all trading accounts in China, after the discovery that some clients have unfairly executed risk-less arbitrage. Due to the screening process, a number of withdrawal requests have been affected.

Nevertheless, ACFX is operating as normal and tries its best to carry out the withdrawal requests of the clients, whose trading accounts have already been screened. Ending on that note, ACFX apologizes for the inconvenience that has been caused by the screening of accounts.

ACFX China case falls onto a significant time frame as last year very similar event took place in China but against another Forex Broker, IronFX. In IronFX case angry mob of Chinese clients attacked the company's China offices. The incident went to such level that IronFX left a number of jurisdictions, closed down its offices.

As an aftermath, a number of IronFX China employees were targeted by ACFX. Would it be just history repeating itself or it is just a coincidence?