Trump election trades have certainly had an impact on a number of traders, as international stocks, hospital, gun and gold stocks have been hammered.

14 November, AtoZForex – Financial analysts believe that infrastructure spending will appear as one of Donald Trump‘s first achievements in office, as buying the S&P 500 was the most popular investments the day after the election.

Markets had largely been considered as positioned for a Clinton victory, some top Wall Street analysts had expected stocks to decline by several percentage points if the real estate mogul won.

But in a gigantic recovery from almost 5 percent elections night decline in stock index futures after Trump won, US stocks rose Wednesday in the highest trade volume day since Brexit in June, with financials and health care index leading.

Bank of America Merrill Lynch’s (BofA) has conducted a survey of 114 global fund managers on Wednesday. According to the data, though Trump election trades were not as expected as Clinton trades, yet thirty percent of survey respondents said they bought the S&P 500 index, making it their top post-election financial market action. Other popular trades were selling risky equity, buying gold and buying the USD, according to the survey, which was published on Thursday. 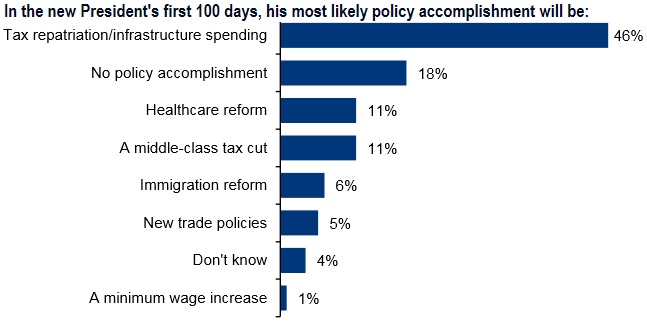 While the initial stock market reaction may have been positive, more than half of traders think more political and financial crisis risk is still to come, where 59 percent said the Trump win will not affect their equity holdings. Moreover, about one-fifth will decrease cash, while one-fifth will boost cash, the survey said.

What about Fed rate hike?

Ian Bremmer, the President of Eurasia Group, said in a Wednesday news release after Trump’s victory, “the world is heading into a long-term geopolitical recession.” He has added:

“A Donald Trump presidency means the most significant hit to the American power and leadership globally than any other event since the failure of the Soviet Union.”

Nearly half of people said they thought the election lowered the chance of a Fed rate hike in December, while 14 percent said it has elevated the odds.

“This follows ‘policy unpredictability’ fictive and explains why US corporate tax reestablishment hopes” aren’t yet leading to an “acute bullish view” on the US dollar, the BofA report said.