The following is weekly BoC Monetary Policy Report analysis and BoC Rate Statement highlights along with Overnight Rate decision and their effect on the CAD.

19 October, AtoZForex – The Canadian economy has faced headwinds in exports in recent months due to much stronger CAD as the Bank of Canada (BoC) took a backseat in order to allow Mr. Trudeau’s fiscal plans to begin to work and an increase in Crude Oil prices.

The consensus going into October BoC meeting was for the central bank to leave interest rate unchanged at 0.5% and thus the market’s focus will be on updated forecasts for the Canadian economy.

The Bank of Canada today announced that it is maintaining its target for the overnight rate at 0.5%. The Bank Rate is correspondingly 0.75% and the deposit rate is 0.25%.

Regarding the economic outlook, the Bank expects Canada’s real GDP to grow by 1.1% in 2016 and about 2% in both 2017 and 2018. This projection implies that the economy returns to full capacity around mid-2018, materially later than the Bank had anticipated in July. Total CPI inflation is projected to remain close to 2% from early 2017 onwards, but downward pressure on inflation will continue while economic slack persists. Meanwhile, household spending continues to rise, along with employment and incomes outside of energy-intensive regions.

However, the federal government’s new measures to promote stability in Canada’s housing market are likely to restrain residential investment while dampening household vulnerabilities and mitigating risks to the financial system over time.

Overall balance of risks is neutral and is still in the zone for which the current stance of monetary policy is appropriate and the Bank of Canada is happy with where they stand.

Looking through the choppiness of recent data, the profile for growth in Canada is now lower than projected in July’s Monetary Policy Report (MPR). Nonetheless, the adjustment of the Canadian economy to low commodity prices is progressing against a backdrop of weak but improving global demand. The global economy is expected to regain momentum in the second half of this year and through 2017 and 2018.

The forecast for real GDP growth has been revised down since the July Report. Average growth over the third and fourth quarters of 2016 is expected to be about 2.5% (Table 3). This is lower than anticipated in the July Report, reflecting a downward revision to exports, a pullback in housing activity and a shift in the timing of the implementation of federal infrastructure measures that pushes some of the impact into 2017. 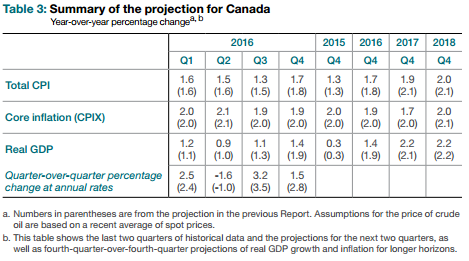 The latest inflation was weaker than anticipated, reflecting lower inflation for food and gasoline, as well as sector-specific shocks to telecommunications prices. Total CPI inflation is expected to move up over the coming months as gasoline prices exert less downward pressure. 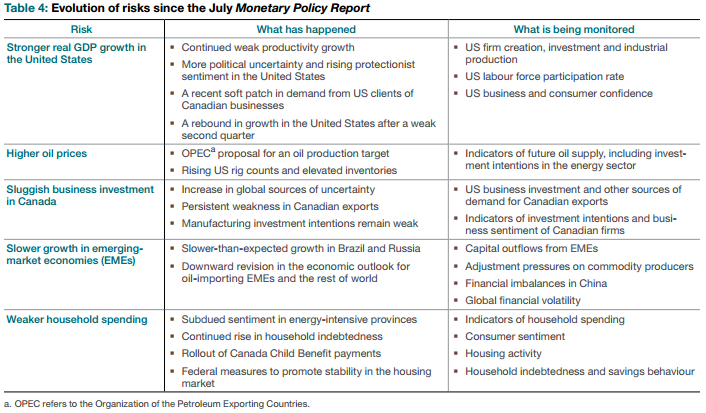 Overall, despite lower BoC forecasts, Canada’s economy is holding up well following 1.6% contraction in Q2 2016 and the near term outlook for 2017 still appears to be strong.