BoA, SEB, Barclays US ISM Manufacturing PMI expectations shared here  into the what traders can possibly expect. With probability for a December rate hike. How will the markets respond? USD bullish or Bearish?

1 December, AtoZForex – Insights by BoA, SEB and Barclays into what traders can possibly expect from the US ISM Manufacturing PMI. How will the markets respond? USD Bullish/Bearish?

BoA expects the initial estimate to show increased strength to 52.5 for November, up 0.4 from October. Signals from earlier regional surveys indicate

BoA also look into any improvements made by the Chicago PMI.  BoA view was ..

“.. while manufacturing activity should see improvement, the recent increased dollar strength represents a downside risk in the near term.”

The ISM manufacturing index exceeded expectations, even though only a slight increase from 51.5 to 51.9. The index is in inline with real GDP growth (annual rate) of around 2%.

A combination the rise in employment index, an increase in new export orders are encouraging, while regional surveys suggest an improvement. SEB’s view is

“…our ISM model is suggesting a small uptick to 52.2 in November which is our forecast.” 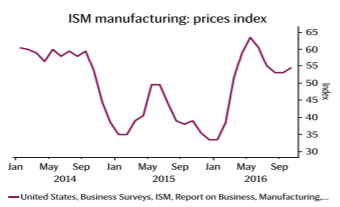 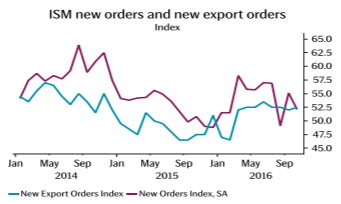 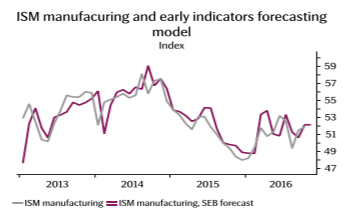 “.. At the national level, manufacturing employment remained weak through October. We expect the November ISM index to deteriorate slightly from 51.5 to 51.9 in October.”