09 December, AtoZForex.com, London – As USDCNY has reached a new high this morning at 6.4250, thanks to Chinese authorities permitting further RMB depreciation, BNP Paribas shared its analysis on USDJPY and other Asian major currency pairs providing levels and targets.

The upward sloping trend in USDCNY is consistent with BNP Paribas expectations that the currency pair will trend higher towards 6.60 throughout 2016 as the USD rebounds.

“Such expectations signal a continuation of the move higher in USD/Asia and should also lend support to a break higher on USDJPY,” BNP Paribas pointed out.

Moreover, USDJPY is also unusually lagging behind the recent sharp rise in US 2-year yields (see chart below). 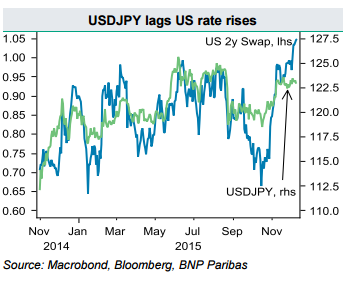 “The lag may be explained by risk-off characteristics with the USD gaining ground vs. EM and commodity exporter currencies but weakening vs. the low-yield funding currencies,” BNP Paribas argues.

The bullish USD view is supported by BNP Paribas CLEER model which provides model-based forecasts for cyclical equilibrium exchange rates depending on fundamentals of economics. Forecast for EURUSD has declined to 0.98, based on CLEER model, as monetary policy divergence between the Fed and the ECB has intensified recently for the years ahead.

Meanwhile, CLEER projections for GBPUSD are ranging between 1.50 – 1.53 level for the year ahead. The model projects the pair to consolidate or trade broadly stable since both central banks are expected to tighten monetary policy in 2016.

“Declines in Australia commodity prices have pushed its CLEER AUDUSD projections down to 0.62 by end-2017,” BNP Paribas added.