Blockchain Transparency Institute has claimed that Binance exchange is wash trading. The report also found that US-based cryptocurrency exchange Kraken is the "cleanest" in the crypto space.

May 6, 2019, | AtoZ Markets - Another week, another report that delves deeper than ever before into the excessive presence of wash trading across crypto exchanges.

Blockchain Transparency Institute (BTI), a group of blockchain data researchers and enthusiasts looking to bring more transparency and trust to the cryptocurrency market, released a report comparing the trading volumes on different crypto exchanges and which of them uses wash trading techniques to show an inflated number.

According to its April 2019 Exchange Volumes Report, Malta-based cryptocurrency exchange Binance has been named in the report as one of the exchanges that use wash trading techniques. As illustrated in the graph below, top exchanges by volume, at the time of their report, include obscure exchanges such as 000BTC, FatBTC, Bibox, and 55 Global in the top 15. Binance exchange is ranked ninth. Bitfinex, Kraken, Coinbase, and Bithumb are nowhere to be seen: 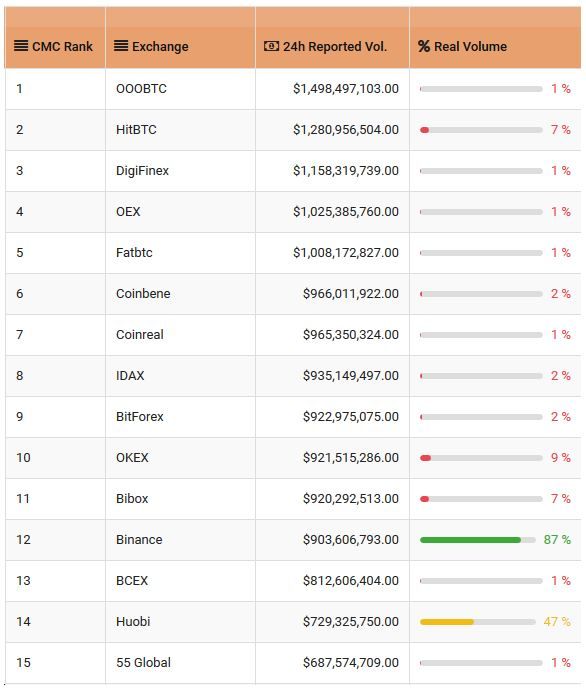 As part of the report, the discovery was made with an algorithm that calculates the true volume of the CoinMarketCap top 25 Bitcoin trading pairs. It discovered that the vast majority, that is, over 99%+ fake with many greater than 99.5% fake volumes, including 35 of the top 50 adjusted volume rankings.

Over 60% of all exchanges ranked on popular data sites have little to no volume and were found to be over 96% fake each. As a result of the findings, CoinMarketCap has announced that it will be revamping the metrics it uses to measure and report trading volume.

Kraken named as the “Cleanest” exchange

Meanwhile, the same report states that Gate.io, Bitso, Upbit, Bittrex, Poloniex, Liquid, Coinbase, Lykke, and Kraken were listed as some of the cleanest exchanges with more than 90% of their trading volumes being real and free from any kind of wash trading.  US-based crypto exchange Kraken was identified as the “cleanest” exchange with a “real” volume with 99% of its trading volume being free from any kind of wash trading. 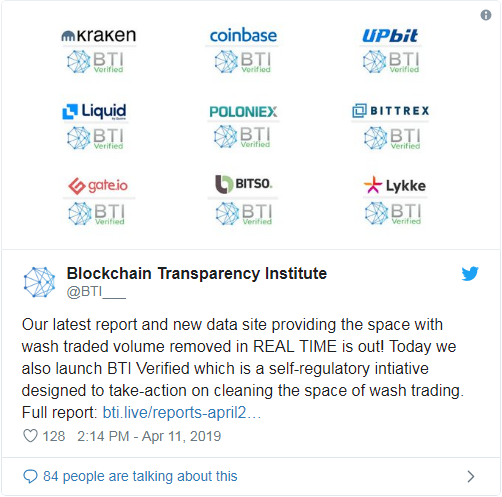 According to the report, Bitfinex, one of the exchanges embroiled in a serious bout of bad press in relation to an $850 million loss, almost made it to the list, which might have shone a ray of positive light on the firm to regain some trust of the crypto community. Yesterday, AtoZMarkets reported that CoinMarketCap has decided to exclude the exchange from the market capitalization assessment.

Despite the Blockchain Transparency Institute’s findings, however,Binance was recently named in a report by Bitwise Asset Management as one of only ten exchanges that has “actual” Bitcoin trading volume.

What is Wash Trading?

Wash trading, which is an epidemic in the crypto market is an illegal act of simultaneously buying and selling an asset in order to falsely drive up trading volume, of feed misleading information to the market. In some situations, wash trades are executed by a trader and a broker who are colluding with each other, and other times, wash trades are executed by investors acting as both the buyer and the seller of the security. This practice remains a major problem in the cryptocurrency industry.

Some of these exchanges mentioned above employ wash trading methods in order to make themselves more attractive to new projects who may be willing to pay higher listing fees. The list comes with a warning to contact the Institute before paying large listing fees to any of these exchanges.

The report has suggested that these exchanges use wash-trading as a method to steal money from aspiring token projects. Moreover, malicious traders who are seeking to pump up the value of an asset may also employ wash trading in order to cause unwitting investors to buy them up, driving up the price for a pump-and-dump scheme.

“If I’m an investor looking to invest in a crypto project…one of the most important things is that if I want to invest $1 million, I want to make sure that I can sell $1 million in the exchanges.”