According to research conducted by Clovr, 15.8 percent had used cryptocurrencies to send $148 billion remittances from the United States back to their countries in 2017.

December 26, 2018 | AtoZ Markets - A new research conducted by a cryptocurrency firm Clovr, has revealed that there is a significant growth in the use of cryptocurrencies to send remittances around the world. The upsurge in the use of cryptos like Bitcoin, is due to the high costs incurred when using more traditional methods such as Western Union or Moneygram.

Crypto Remittance On The Rise

The report, titled "Sending Money Back Home: Worldwide methods people use to transfer funds,” surveyed the responses of 707 people who have sought to use cryptocurrency to send money abroad because of its efficiency and speed. This makes cryptocurrency one of the most popular methods, ranking in fourth place of cross-border remittances after using a traditional wire transfer, an online service, or money transfer service. The report notes:

If some of the largest companies in the world, like Microsoft and Starbucks, are comfortable accepting cryptocurrencies as a form of payment, this should instill confidence in using these new forms of payment for sending remittances.

The research revealed 20 countries — as the infographic below shows — who have received most remittances from the United States in the year 2017. The top ten countries mentioned on this list include, Mexico, followed by China, India, Philippines, Vietnam, Guatemala, Nigeria, El Salvador, Dominican Republic and Honduras. 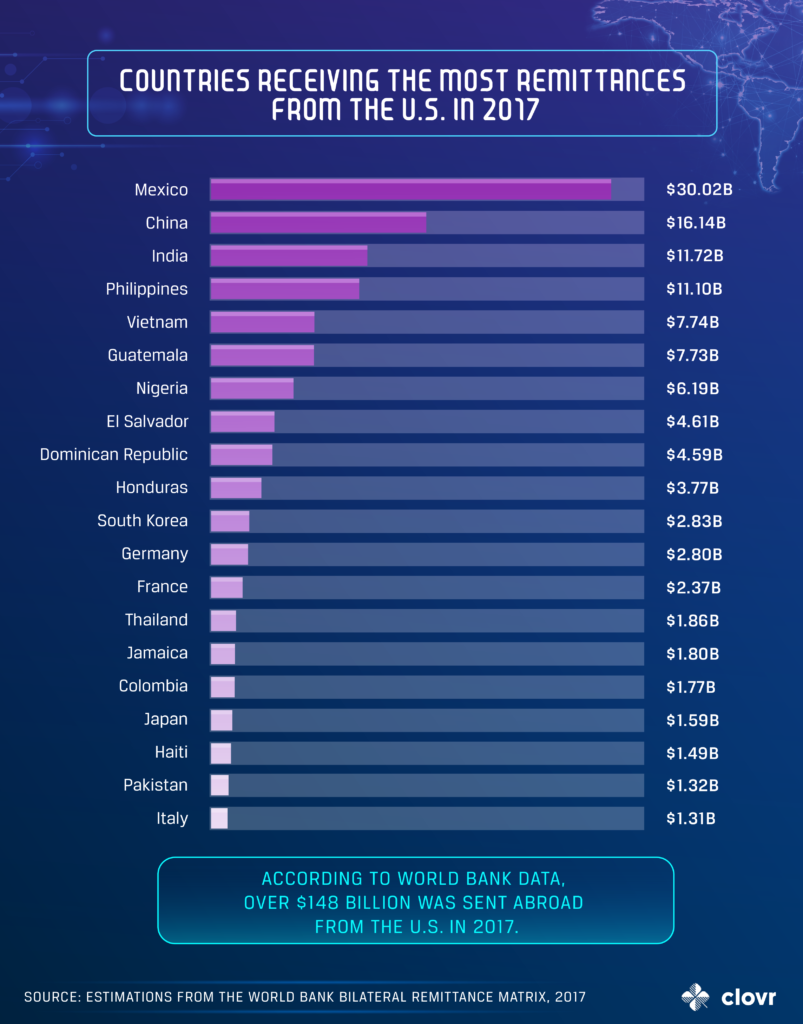 From the Clovr study, 15.8 percent of the surveyed people indicated that they have sent money abroad using cryptocurrency, while 25.7 percent use traditional bank wire transfers or credit union, and 12.2 percent use prepaid cards. 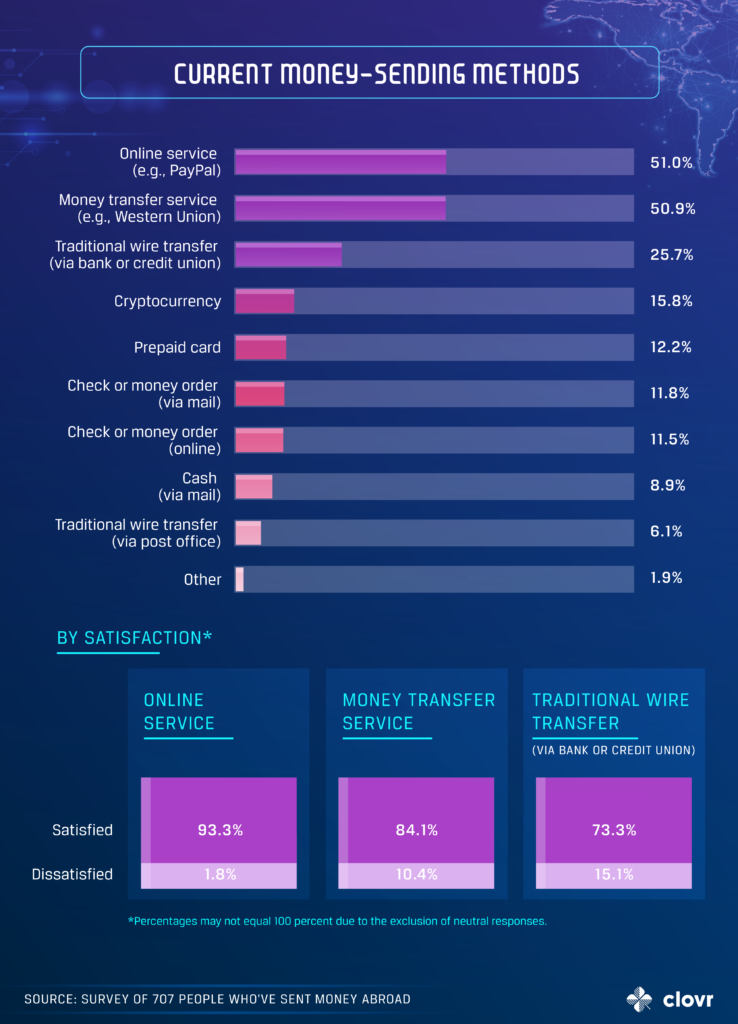 The Clovr report also shows a significant gender knowledge gap on the subject of cryptocurrencies as men were more likely to have used cryptos for international transfers than women.

Moreover, of those participant interviewed, 85 percent were satisfied with using it as a remittance method. As per Clovr's report, it is revealed that those who are yet to use this method were skeptical because of their lack of knowledge of how they work. 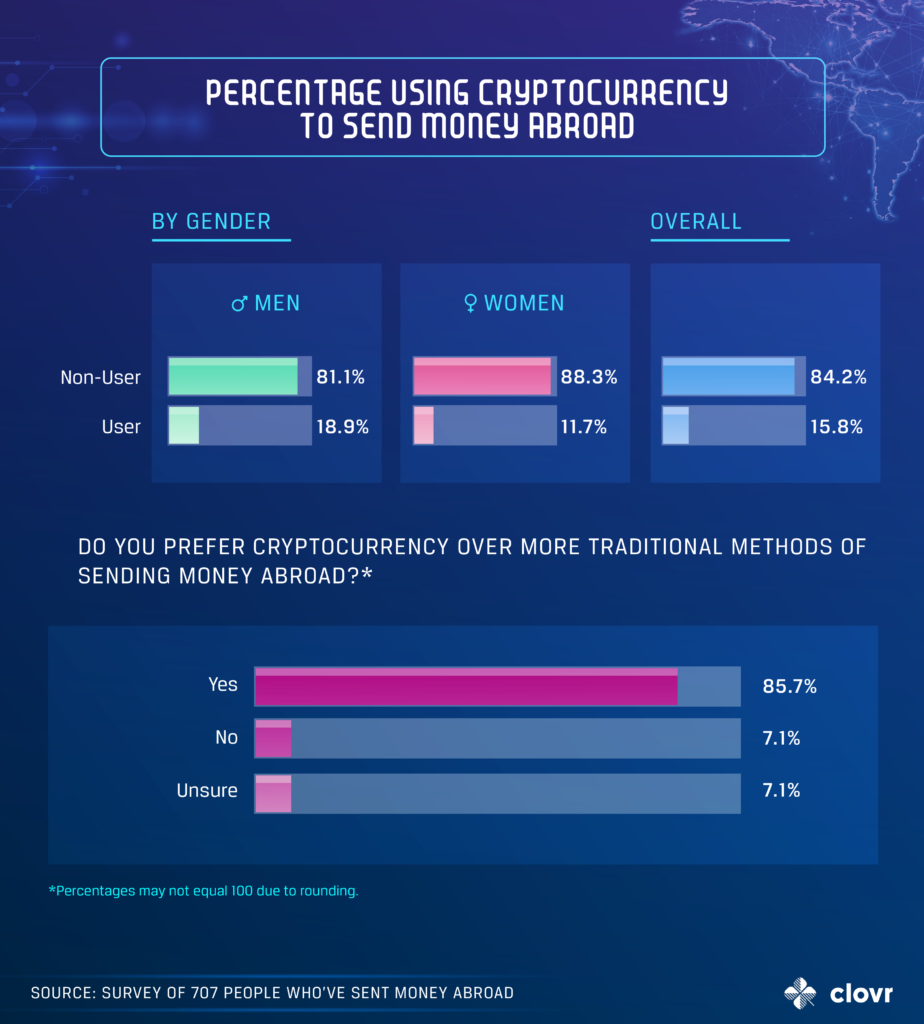 The report concludes that the money transfer industry is “ripe for disruption” with the introduction of cryptocurrency-based solutions, which could potentially provide an easier, cheaper and faster way to transfer funds. An excerpt from the report reads as follows:

People sending money home after they’ve migrated from other countries to the U.S. is a practice that will likely continue far into the future… As individuals look to make sure that as much of every dollar they send can make it back – as close to a one-to-one match as possible – digital payment options, like those presented by cryptocurrencies, can pique the interest of customers.