According to a shareholder of the Hong Kong-based cryptocurrency exchange platform, Bitfinex may soon issue a proprietary exchange token.

01 May, 2019 | AtoZ Markets –  Dong Zhao, a well-known over-the-counter trader in China who holds a stake in Bitfinex, first announced the news on Weibo, a Chinese microblogging website.

Zhao also revealed to one of the media outlets, that the exchange is planning the issuance, although the “details are not 100 percent confirmed.”

Indeed, at this stage, it is unclear how the plan will be implemented. Or what precisely the participants will be offered proposals on the exchange of tokens.

Bitfinex Needs to Restore Its Reputation

If confirmed, this news deserves attention. Bitfinex needed more than ever the opportunity to restore its reputation. The recent allegations of the crypto exchange by the New York Attorney General’s office (NYSAG) caused a significant Bitcoin flash crash and harmed the Bitfinex.

According to the NYSAG official statement, Bitfinex lost $850 million and used customer and corporate funds from the affiliated stablecoin operator Tether to cover their loses.  As per Attorney General, Bitfinex also secretly arranged a $ 900 million loan from a subsidiary of the Tether exchange. However, that issues a stable (tethered) currency (USDT) to cover the deficit.

Bitfinex Responses to the Allegations

“The New York Attorney General’s court filings wrote in bad faith. And those riddled with false assertions, including as to a purported $850 million “loss” at Crypto Capital. We are and have been actively working on exercising our rights and remedies. Sadly, the New York Attorney General’s office seems to be intent on undermining those efforts to the detriment of our customers.”

The Hong-Kong based crypto exchange noted, $ 850 million had been “seized” by various authorities. And it was working to retrieve the funds.

Dong Zhao is the Mind Behind Bitfinex Token Idea

The Chinese trader Dong Zhao is also the founder of the investment company DGroup. However, he assured that he proposed the Bitfinex token plan. Just a few days after the statements of New York attorneys, he said in his Weibo account that the exchange should take the opportunity to issue tokens worth $ 850 million. That brings in Tether equal to the frozen amount.

According to the Chinese trader, the method of issuing may be similar to the technique of other exchange tokens that are distributed through pre-paid trading fee packages. Dong Zhao assured that he would do his best to make the deal happen. Weibo users ambiguously accepted Zhao’s proposal. Many were skeptical about whether Bitfinex could indeed return frozen funds.

Last Friday, Zhao said that the Chief Financial Officer of Bitfinex told him that the frozen $ 850 million would be returned “within a few weeks.” Dovey Wan is the founding partner of the blockchain fund Primitive. He also raised several controversies regarding public information about Bitifnex and Tether: 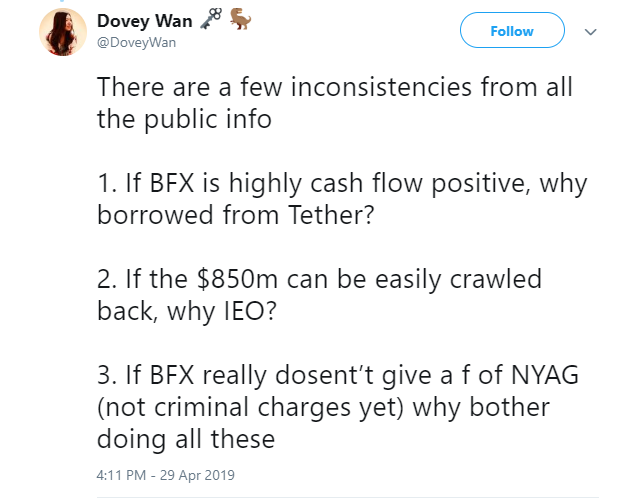 Bitfinex has not provided any comments to an Atoz Markets request.

Ethereum Foundation Reported That the London Update Is Now Ready on Testnets.
Forex Crypto
Top 5 Forex Brokers
Top 5 Crypto Exchanges
Your subscription could not be saved. Please try again.
Thank you for subscribing. You will be the first to receive all the latest news, updates, and exclusive advice from the AtoZ Markets experts.
Everyone is reading
Can Ripple Break Below $0.55 Significant Event Level?
Ethereum Facing Support Around $2,300 Price Area - Will Strike Upward?
Ethereum Remains Below $2,100 Resistance Area - What Next?
close ×