Bitfinex IEO raised $1 billion in a recent private token sale. It took one of the largest crypto exchanges just ten days to raise money. That will help Bitfinex to cover $850 million which the governmental authorities seized.

17 May, 2019 | AtoZ Markets – On Monday CTO at Bitfinex,  Paolo Ardoino tweeted about successful finalization of the Bitfinex private token sale. He also said that it “can raise 1b USD in 10 days”. 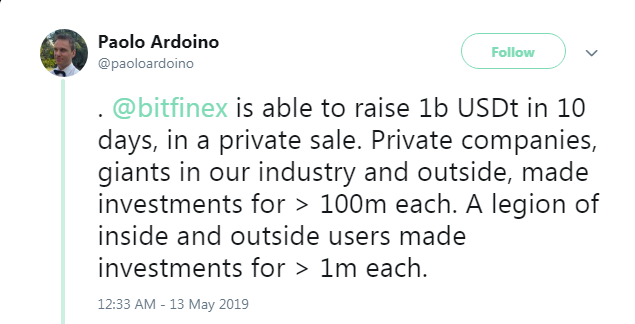 The company collected money via an initial exchange offering (IEO) of Tether, a stablecoin operated by its sister company. According to Arduino, multiple private companies “giants in our industry and outside” invested over $100 million each.

Investors Fulfill Their Commitments to Bitfinex

One of the significant Bitfinex shareholders is Chinese trader Dong Zhao. Just a week ago, he announced that Bitfinex IEO has already received one bln сommitments in USDT (Tether). Zhao also reported that investors have already lined up to buy the Bitfinex exchange LEO token. That will reportedly be used on Bitfinex for internal services.

The first time the Bitfinex shareholder mentioned in social media about the crypto Bitfinex’s plan to issues its own proprietary exchange token.  However, he said then that most likely Hong-Kong based crypto exchange would not be making a public sale for its token.

One of the largest crypto exchanges has experienced a massive departure of traders. The New York City Attorney General’s office announced that Bitfinex and Tether used tether funds in the wrong way. Besides, CoinMarketCap (CMC) decided to exclude Bitfinex from the market capitalization assessment. However, it was more than a week later after a scandal surrounding iFinex Inc. iFinex Inc manages Bitfinex and owns Tether Ltd.

The experts also suggest that the sudden rise in prices on the Bitfinex platform. However, This led to its removal from the CMC. However, Tether holders exchanged their tokens for other cryptocurrencies to withdraw them from the exchange. Will Bitfinex be able to recover its reputation? Only time will say.