It has been ten years today since the first proposal for issuing a new currency, that is radically different from the ordinary fiat currency circulated in the market. Ten years since the concept of buying and trading started to be prone to changing, between ebb and flow. Ten years of Bitcoin- the virtual electronic currency Satoshi Nakamoto proposed to emerge the market, which later got to be known as “cryptocurrency”.

Nakamoto’s whitepaper for bitcoin was presented in 2018, in parallel with the global financial crisis back in the time, where the currency was said to have been considered as part of the solution for the crisis.

Ten years of controversy today between refusal and approval among consumers and traders in the market.

Promises and warnings, hopes and fears, conferences and summits, success and failure, profits and losses, and other common details in the way of the “electronic cash”, like they are on the way of any consumer product.

Where is bitcoin today? And where is it going tomorrow?

Who is Satoshi Nakamoto and what is his bitcoin?

The name of Satoshi Nakamoto, as cited on Wikipedia, was given to the unknown person or group who developed the digital currency Bitcoin, authorising its whitepaper, and deploying its original reference implementation.

For the “suggested” currency to work, a venue needed. The venue in this case is a software that needs to play the role of an “incubator” for the currency, and that is where implementation of the idea devised the first blockchain database.

Most notably, the argument about bitcoin pivoted around its high power consumption, price volatility, being prone to hacking, and the fears that bitcoin could be mere an economic bubble.

Where on the other hand, the currency has been used as a means of investment, and within times, more and more investors got open to experience the “adventure” and join the game, with few business accepting payment in bitcoin.

What could professionals tell about the consumer interest in bitcoin?

"Bitcoin is still an experiment today", says Yagub Rahimov- the CEO and founder of the 7marketz Group.

The experienced investor sees that bitcoin is going to be regulated and replace the fiat money sooner or later, with the financial regulatory bodies showing interest in studying and observing the aforementioned digital currency.

"Bitcoin may contribute in getting economy under control", says Rahimov.

The latter added as well that the market will witness more rallies in the digital currencies space.

We at the seven markets group ended up in the bitcoin road in July, 2009, for the sake of curiosity only, and I personally consider that incident as the best I ever invested my money in something accidentally. 7Marketz- being majored in FinTech marketing, ICO services, and smart contract advisory services, has been behind a number of exchanges and blockchains up until now, and we look forward to further our activities in this domain in the future”, concluded Rahimov.

Since the interest in cryptocurrency today is obviously touched, an expert eye is needed to to explain in figures how bitcoin grabs consumers’ attention, and as bitcoin is a digital currency run and circulated on a software, there is no better than search engines to acquaint us about the real interest.

AtoZ Markets has spoken with Mihai Milea, the Chief Digital Officer at the 7Marketz Group, and came with the following facts:

Interest over the last 10 years

Interest over the last 5 years

From his wide and solid expertise over years of pioneering in search engine optimisation techniques and variant IT areas, Milea says: “looking at Google Trends data, we can see that the first significant volume of search related to Bitcoin was in 2011, a time when only very few IT and cryptography professionals became familiar with the project. Before this moment, on 22 May 2010, we had https://www.investopedia.com/news/bitcoin-pizza-day-celebrating-20-million-pizza-order/ , showing just how narrow the interest in cryptos was. This was followed by another increase in 2013, when the interest became more widespread, but still kept within IT-related communities. Bitcoin went mainstream in May 2017, when there was the first real spike in search traffic. This continued until reaching a formidable peak in December 2017.

We can see a pattern in how the interest in Bitcoin comes and goes, depending on the media hype around it. However, it is clear that the public is waiting for Bitcoin to become more mainstream in order to sustain interest over it.

In short, we all know about Bitcoin now. It is no longer a product accessible only to few. But technology developers and business owners need to use it more in real life scenarios in order to prove just how powerful Bitcoin actually is. With blockchain becoming the fastest most adopted technology over the last year, we can only expect to have more Bitcoin and other cryptos in our lives”. 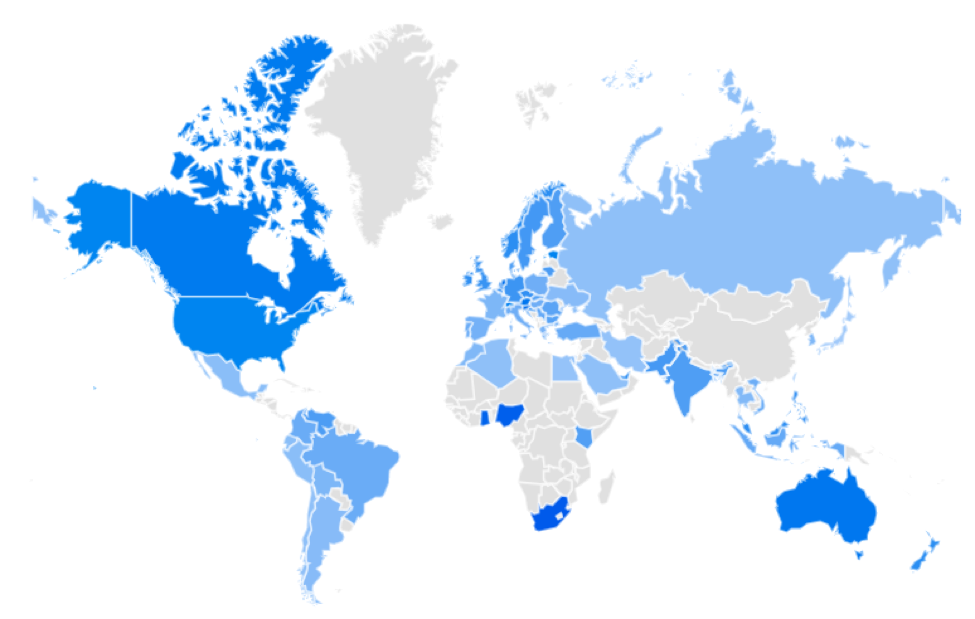 Bitcoin enthusiasts are making use nowadays of the modern telecommunications, like social media platforms, to discuss crypto-related topics and follow the trends in the financial space, as companies market on their pages, in addition to sharing their passion toward the virtual currency and get impressions by others as well, to know in which way they look at it.

In her turn, Kelsey Ray– a copywriter and experienced social media specialist, sees that tokens and blockchain are still circulated in the talk over the social media platforms like Facebook and LinkedIn.

“While Google Trends has seen a stark decline in searches for crypto and bitcoin after January 2018, cryptos, new tokens, and blockchain are still highly valued on social, where you will see highly active crypto-dedicated groups on Facebook and LinkedIn, as well as a popular Subreddit page. It's not too much different on Twitter and Instagram, either – Instagram had over 1.6 million posts under "Crypto" alone! Social Media is where professionals and enthusiasts come together to share ideas and their favourite projects – and the conversation is continuing to grow”, said Ray to AtoZ Markets.

Bitcoin -today after 10 years of history- in spite it hasn’t yet matured, it still promises of new horizons to open in the world of finance and trading tomorrow.

And while regulators still take a careful stance from it, news report that after Venezuela, some other few states are considering regulating bitcoin and cryptocurrency in general, to be officially certified as a means of buying and trading.

El Salvador and What It Means for Bitcoin Adoption

“Lightning Network on Twitter Is Only a Matter of Time” – Jack Dorsey
Forex Crypto
Top 5 Forex Brokers
Top 5 Crypto Exchanges
Your subscription could not be saved. Please try again.
Thank you for subscribing. You will be the first to receive all the latest news, updates, and exclusive advice from the AtoZ Markets experts.
Everyone is reading
SEC Lawsuit Against Ripple May Drag On Until 2022
Ethereum Sustains Below $2,500 Psychological Area - Bears to Push the Price Downside?
Will the Prices of Gold and Silver Rise After FED Meeting?
close ×