The Cryptocurrency market has lost nearly $6 billion in the last 12 hours hours as the bearish move persists. Will bitcoin drop further?

December 06, 2018 | AtoZ Markets – Bitcoin and other cryptocurrencies have seen their values plummeted this year. Most cryptocurrencies have lost more than 85% of their market value in 2018. Bitcoin has lost about 47% in the last four weeks to trade at a new 2018 low. In the last days of November, Bitcoin and others rallied a bit but the small recovery lacked enough momentum to convince the market. Bitcoin, in the last one week has dropped back to the new low. It's quite very likely that there will be a fresh low before 2018 runs out. Unless a fast bullish spike happens, the bearish trend might even continue into the early weeks of 2019.

Other cryptocurrencies have performed in like manners as Bitcoin. Ethereum and Stellar have declined by more than 10% in the last couple of days. Ripple is heading back to $0.3 while Litecoin sank below $30. Bitcoin still has the bulk of the market dominance. Market capitalization has dropped while trade volumes stay steady as the bears take advantage of the sell-off.

That is a possibility but might not happen this year. After the 9-month triangle breakout last month, price has dropped to $3500 low. Presently there is no sign of price bottoming yet. From Elliott wave perspective, it will require at least a bullish impulse wave push to $6000-$7000 region to assume price has bottomed.The rally from $3500 looks corrective and price is very much expected to dig further and hit a fresh 2018 low. The chart below shows Bitcoin Elliott wave analysis since the 9-month triangle breakout. 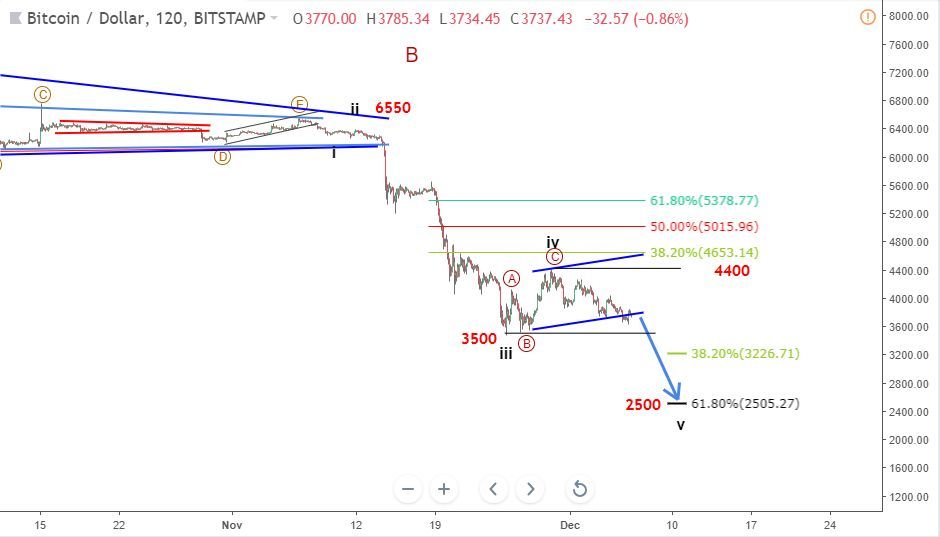 On the near-term outlook, the bearish move from 6550 is completing an impulse wave. Probably at the end of the impulse wave, price would start a real bullish correction or recovery. From the chart above, it seems the impulse wave from 6550 completed its 4th wave at 4400 and price is now close to 3500 low (3rd wave terminus). A break below 3500 will see it head toward the next bearish target at 2500. Perhaps this will be the new 2019 low. On the upside, there are Fibonacci resistance levels. If price holds above 3500, it might make one more bullish leg to 4600 before finally dropping. If a big rally happens above 5400, we will most likely see price at the 6000-7000 price zone. After that, we might start talking of possible recovery. The higher likelihood still points downside.

Tags Bitcoin Bitcoin price prediction Cryptocurrency
Forex Crypto
Top 5 Forex Brokers
Top 5 Crypto Exchanges
Your subscription could not be saved. Please try again.
Thank you for subscribing. You will be the first to receive all the latest news, updates, and exclusive advice from the AtoZ Markets experts.
Everyone is reading
Is Forex Trading Halal or Haram in Islam?
Top 5 cryptocurrencies 2021 | Best Cryptocurrency To Invest
How to Setup Monero Mining in 2021?
close ×