Bitcoin has geared up this week. It briefly hit $6750 before dropping marginally to current level at $6450. The bearish forces have failed to drag BTC down below $6000 for the fourth time this year. Will there be a bullish breakout instead?

Bitcoin price volume has increased significantly this week. According to CoinMarketCap, the volume which was around $3 billion at the start of this week, peaked above $7 billion in the last two days before dropping to the current $4 billion. The $108 billion market cap at the start of the week has increased to last week’s average of $114 billion. There are also positive news surrounding the Crytpo space, keeping BTC afloat above $6000 and probably waiting for a more assured bullish trigger to break upside.

Despite this year bearish trend, the largest Crytpo coin has stayed above $6000 after failing to break below $5700-5800 support levels thrice. Last week fast fall was expected to do the damage but price is still held above $6000 – currently stabilizing between $6400 and $6500. This is raising hopes among bullish enthusiasts. Is it yet time for the expected bullish recovery? Let’s take a technical look.

Is Bitcoin Looking For Another Triangle Breakout?

If there is anything technical analysis has taught us about the Cryptos, it’s the fact that triangle patterns precede big moves. Many of the big breakout moves we have seen, come after a triangle chart pattern has completed. The breakout direction is not certain though. In more cases than not, the breakout follows in the direction of the preceding trend before the triangle pattern. However, the last crash to $6000 happened after the completion of a triangle pattern that was preceded by an immediate bullish trend. The chart below shows a new triangle pattern surfacing. 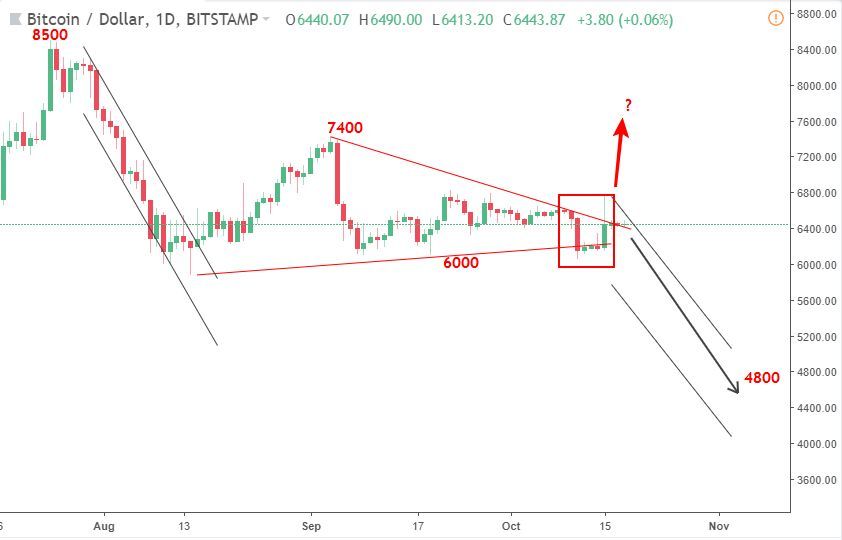 Going with the chart above, BTC might be at the edge of another big move. With a large bullish candle formed four days ago, price might be signaling an upside breakout to $7400 or even $8500 in the coming weeks. However, if price breaks downside to continue the immediate bearish trend from $8500. A break below $6000 would be required to trigger more price dip to the next bearish target at $4800-$5000.

In what direction do you think the next breakout would be? What are your next price targets? Please share your thoughts with us in the comment box below.