May 22, 2019 | AtoZ Markets – Bitcoin SV more than doubled on Tuesday following reports that Craig Wright has registered Bitcoin copyright claims with the United States government. This was according to a press release by CoinGeek owned by Calvin Ayre who was a notable BSV cheerleader. With the release, Calvin tends to ”exaggerate” the importance of Craig’s claim which confirmed him the rightful founder of Bitcoin – Satoshi Nakamoto. The information provided by CoinGeek included that the US copyright office has granted Craig the copyright registrations for the original Bitcoin whitepaper.

It should be noted that Craig Wright has been claiming to be the founder of Bitcoin – the so-called Satoshi Nakamoto, since 2015 but without evidence that is strong enough to convince the community. Many in the industry have called him a fraud and rendered his claims baseless, false and sheer nonsense. This prompted him to take legal actions to prove to the community that he indeed created the original Bitcoin whitepaper. With CoinGeek reporting that Craig’s claim has been verified and accepted by the US Copyright office, it remains to be seen how the general crypto market responds.

In spite of the CoinGeek reports, many in the community are yet to be convinced by Craig’s claims. The market was steady throughout on Tuesday. However, Bitcoin SV responded with a big spike from $65 to over $190. Hours after, it lost nearly 50% to stay around $100 and has remained steady ever since. 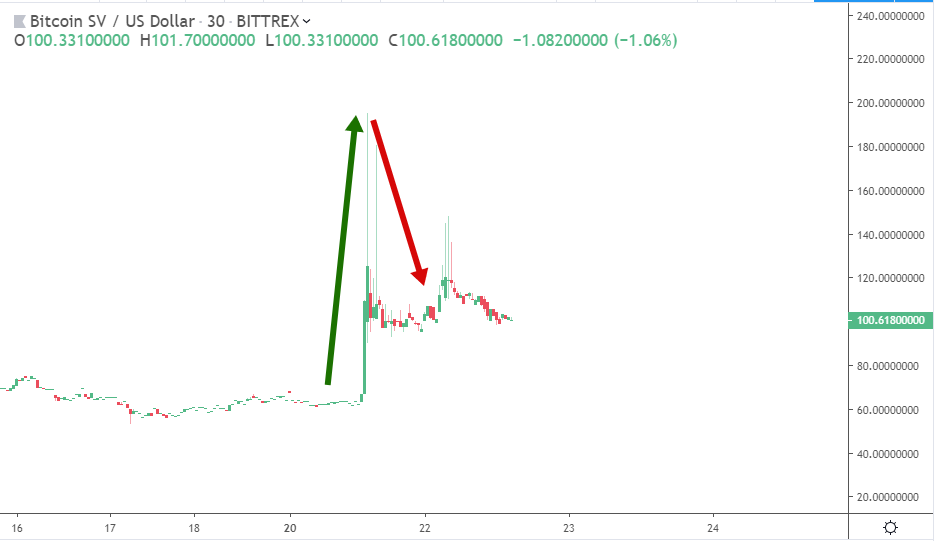 Bitcoin SV was created last November as a hard fork of Bitcoin Cash. Craig Wright was suspected to be part of Bitcoin SV creation. The market saw the news as pro-Bitcoin SV and then the spike followed. Many traders and analysts believe the first spike was as a result of FOMO (fear of missing out) as some folks perceived the news was going to add values to Bitcoin SV.

Meanwhile, the aftermath of the news was not taken well by the community as a lot of backlashes followed. The patent of the Bitcoin whitepaper has led many prominent personalities in the industry frown at Craig Wright. BSV price has followed in this manner with a quick drop. It’s very likely that price will drop further to the $65-70 region.