Recent research shows that while the crypto market was in a downward spiral, falling ceaselessly, the fans of the flagship cryptocurrency, Bitcoin, and Ethereum have been buying the dip.

December 20, 2018 | AtoZ Markets - While the critics of cryptocurrencies argue that the Bitcoin (BTC) is dead in 2018 due to its recent price decline, data otherwise indicates that many investors still see a considerable amount of value in the blockchain-based asset.

According to the report from Bloomberg News’ Olga Kharif, a technology writer for Bloomberg/Businessweek shared her opinion by directly citing data released on Wednesday by a researcher from the blockchain analytics unit Chainalysis.

The research group revealed that Bitcoin’s 30-day moving average flowing into investor's personal wallets has been on the rise, as it has exceeded $400 million by November 1st from less than $300 million in June. 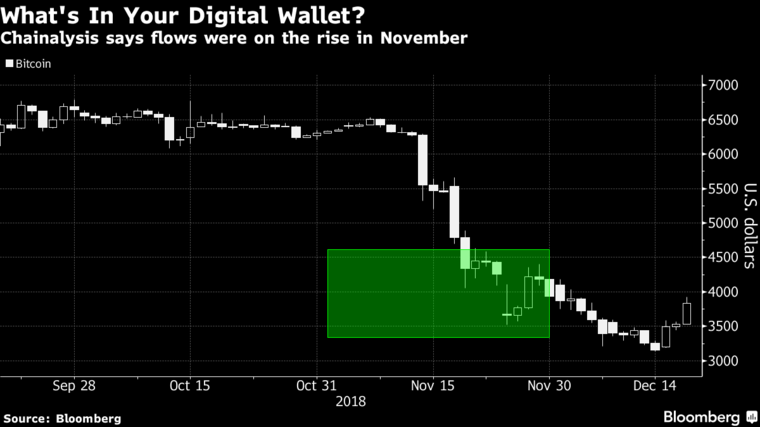 The increase was a partial rebound after the flows dropped during the early months of 2018 from about $900 million in January as Bitcoin's value slumped.

What Chainalysis' Research Reveals About Bitcoin

While in a phone interview, Kim Grauer, an economist at Chainalysis explained that this new data shows that Bitcoin's supporters were accumulating the digital coins at lower prices.

While there are 460 million BTC addresses, Chainalysis discovered that only 27 million of them are actually managed by investors or companies that currently own the number one virtual coin.

The blockchain data firm also divulged that only 20 percent of Bitcoin that moves is exchanged between two parties and while only $9 billion had real economic value, some $41 billion of transactions were executed between the months of August and October 2018.

While the crypto market has been in a downward spiral in the past month, Grayscale, a digital currency asset manager has continued to show their faith in Bitcoin.

According to a research report released earlier this month, the asset management group established in 2013 has been taking advantage of the bear market to accumulate more of the largest digital asset. As it stands, Grayscale has accumulated about 203,000 bitcoins -- an estimated value of $826 million which is more than one percent of the total current supply.

As the chart above shows, the wallets pertaining to Grayscale, a self-acclaimed “trusted authority on digital currency investing,” has seen month-over-month increases thus accumulating thousands of BTC for its in-house Bitcoin Investment Trust (GBTC).

Commenting on the matter, the Cyprus-based Diar wrote:

“Record inflows, however, have resulted in record Bitcoin equivalent holdings with December notching up a little versus the start of the previous month.”

In the meantime, the accumulation has not been limited only to the Bitcoin investment scene. Earlier this month, AtoZMarkets reported as per the data compiled by Diar token analysts, that Ethereum ‘whales’ have doubled down on their holdings as they have accumulated more tokens when price declined.

According to the analysis conducted over 5,200 ETH wallet addresses, crypto whales who are regular traders are sitting on 80 percent more Ethereum than the start of the year.

As a matter of fact, these market monsters now own a jaw-dropping sum of more than 20 million ETH ($2.2 billion), about 20 percent of Ethereum’s circulating supply.