Earlier this week, the BTC unexpectedly exceeded $ 5,000, and this caused a stir among public audiences around the world, which led to massive publicity on mainstream and social networks. Although bitcoin (BTC), according to experts, may not get out of the bear one, due to its relevance, the cryptocurrency has the opportunity to remain in a bull market.

Bitcoin search on Google data analysis in a brief

Bitcoin search on Google tripled from March 31st and reached its peak on April 2, when the price of cryptocurrency increased by almost 20 percent in one hour, reaching $ 4,961, the highest price since November 19, according to one of the cryptocurrency news portals. 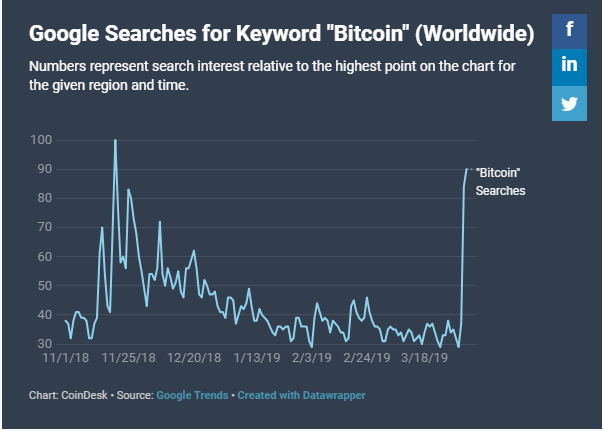 On Tuesday, the search for "bitcoin"  increased as investors, traders and the media started searching for reasons why the price of bitcoin increased.

Most of the search requests came from countries that may not be the most likely in origin. Google data showed that the most requests for April 2-3 were conducted in this sequence on Saint Helena, the Netherlands, South Africa, Nigeria, and Austria. The United States, Canada, and the United Kingdom did not make it to the top 10 of the majority of bitcoin-seekers, taking 11th, 12th and 17th places, respectively.

The term “crypto” has a similar showing as Bitcoin, although not as radical. It is important to note that the trend is global in nature: Google reports that the local population in cities such as Lagos, Vienna, Berlin, Los Angeles, Toronto, and New York show great interest in bitcoins.

Locals in China have also taken an interest in the leading cryptocurrency. “Bitcoin”  trended on Baidu, the nation’s Google equivalent.

The value of a jump in the search for bitcoins may seem trivial at face value, but research has shown that there is a link between the price of a cryptocurrency and its search interest. The main results show that periods of low search volume, as a rule, precede large mark-ups in price, which coincide with the famous or possibly notorious bitcoin market cycles.

Last year Google “Bitcoin” search trends and reasons behind it

Back in 2018 bitcoin was one of the most trending topics on search engines and social media. The reason was the same as now, investors attempted to keep up with this crypto price that fell as low as $6,133 per coin as of late June 2018. Last year data by SEMrush – a leading competitive research service for online marketing – showed bitcoin, bitcoin price, bitcoin value, bitcoin to USD and bitcoin mining as the top five bitcoin-related keywords by bitcoin search on Google volume. 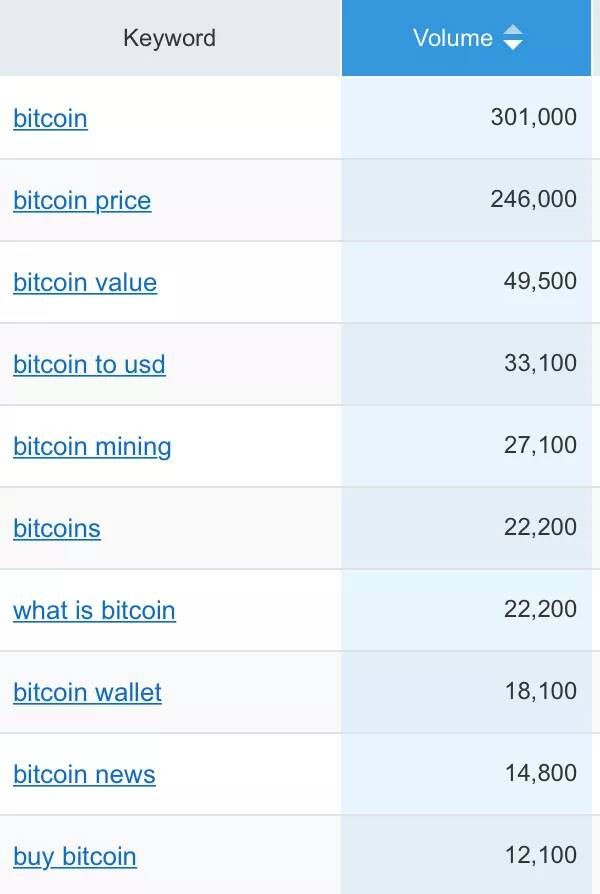 It is obvious that the rise in prices for bitcoins cause growing interest. The price trend was determined by news from different regions and segments. While in China, the cryptocurrency was tightly regulated or banned, Japan and the Philippines showed support for crypto by issuing licenses to bitcoin exchanges. Bitcoin’s entry into financial product offerings had increased its credibility. During last year’s geopolitical tensions and financial turmoil, people turned to Google to get more information about bitcoins. Most people did Bitcoin search on Google in order to find an alternative to the traditional currency or a safe haven. Similar trends were evident during US elections, demonetization in India, tensions between North Korea and the United States, and the crisis in Zimbabwe.

Increasing Bitcoin search on Google indicates that cryptocurrency returns to the public spotlight. This could potentially lead to another rally in the long run. But will these trends be supported across the board in terms of transactional bandwidth, coverage in mainstream media and interest from the public audience?