Yes, that’s right – we have witnessed Bitcoin posting yet another price record! As Bitcoin Price Surpasses $15,000, we look into the key drivers of this digital currency.

7 December, AtoZForex – It seems like nothing can stop Bitcoin from hitting new record highs! Just yesterday, Bitcoin has surged to pass $14,000 level. Now, Bitcoin price has hit above $15,000, according to the data from Coinmarketcap.

The king of the top cryptocurrencies has just proved that it’s still not done with 2017 rally. The price of Bitcoin has surged on the back of a strong night trading session. The cryptocurrency has managed to gain 10 percent to hit the $14,000 level for the first time ever yesterday night.

Bitcoin’s spike move has taken place in the period of the last 24 hours, while the digital currency has climbed by more than 20 percent on worldwide exchanges. Remarkably, Bitcoin price has risen $2,000 in such a short period. 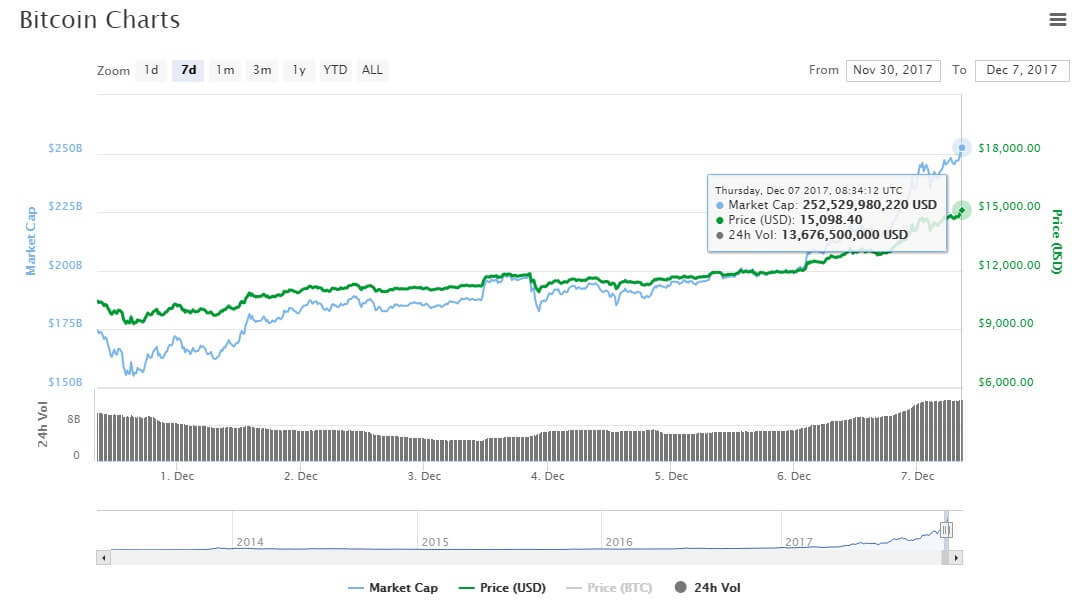 Why did Bitcoin Prices Rise so rapidly?

Some of the industry experts believe that the recent Bitcoin rally is most probably the result of the fear of missing out market behavior and investors’ greed. As per the crypto hedge fund manager Alex Sunnarborg of Tetras Capital:

“People who had bitcoin and went into alts are going back into bitcoin.”

Another certain reason for Bitcoin price record above $15,000 is the upcoming launch of CBOE Bitcoin futures this Sunday.

As a matter of fact, while Bitcoin prices went soaring, other cryptocurrencies’ performances were not that impressive. Such digital coins as BitShares, Siacoin, Einsteinium, MaidSafeCoin, and MonaCoin each lost 10 percent during the night trading session.

However, the total market capitalization figure of the crypto market is rapidly improving. Now, the numbers are nearing $400 billion. For comparison purpose, we saw only $10 billion cryptocurrency market cap in the beginning of 2017.