Bitcoin price slumps below $9,000 on Friday as the week prepares to close. The following technical analysis is based on the Elliott wave theory.

November 08, 2019 | AtoZ Markets - Bitcoin and the cryptocurrency market has continued the bearish run that started late in October. Bitcoin, which has consistently stayed above $9,000 in November, dropped below the psychological level for the first time. The dip to $8,950 meant that the premier cryptocurrency hit its lowest price since October 27. In addition, the dip came after a breakdown from a sideway technical pattern. It now seems BTC price will plunge further to $8,500 or lower. However, the bullish resurgence from $7,300 to $10,500 in late October is still intact and might resume after the current correction.

Prior to this time, the crypto market has remained almost unchanged this week with about $255 billion in capitalization (Coinmarketcap). The market has now lost about $10 billion in the last few days with the largest part of that coming from today's plunges across the board. In the last four hours, the top 5 cryptos on Coinmarketcap have shed an average 1.25% with Bitcoin being the hardest hit with 1.8% drop (at the time of writing this report). This has increased the set-back in the last 7 days to 2% for Bitcoin and almost 4% for Ripple. Whereas, BCH and LTC have recorded over 4% gains each in the last one week. However, Bitcoin still holds the bulk of market share at 66.9%. and still remains the Crypto king.

Technically, the dip from $10,500 is clearly corrective. It will be shocking to see BTC price drop below $7,300. Bitcoin is going back upside. However, before that happens, the market will have to see off the current dip in enthusiasm. The minor bearish momentum will most likely push the price to $8,500 or even lower. In the last update, we weighed the current dip with the Elliott wave theory. We then came up with the chart below. 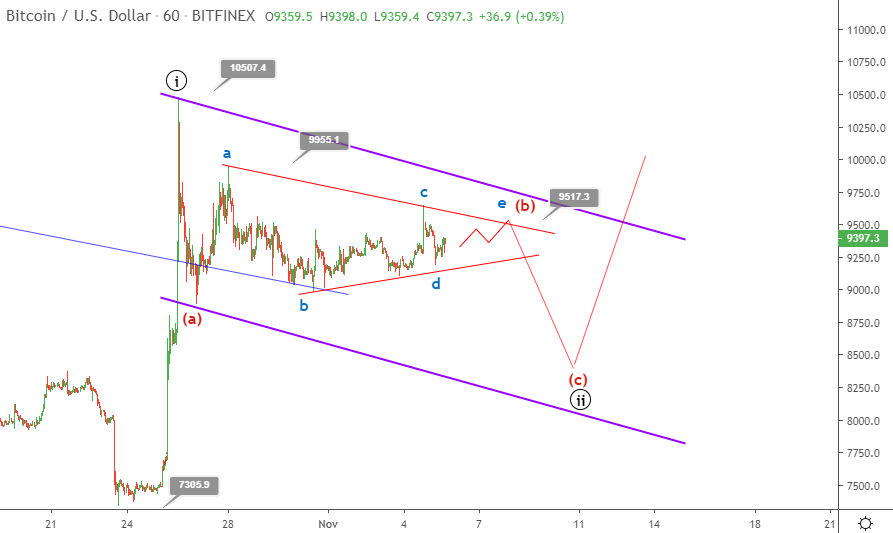 From $9,995, we identified a sideways triangle pattern and anticipated wave e of (b) ending at or below $9,500. Bitcoin price slumps below $9,000 after completing a shallow wave e. 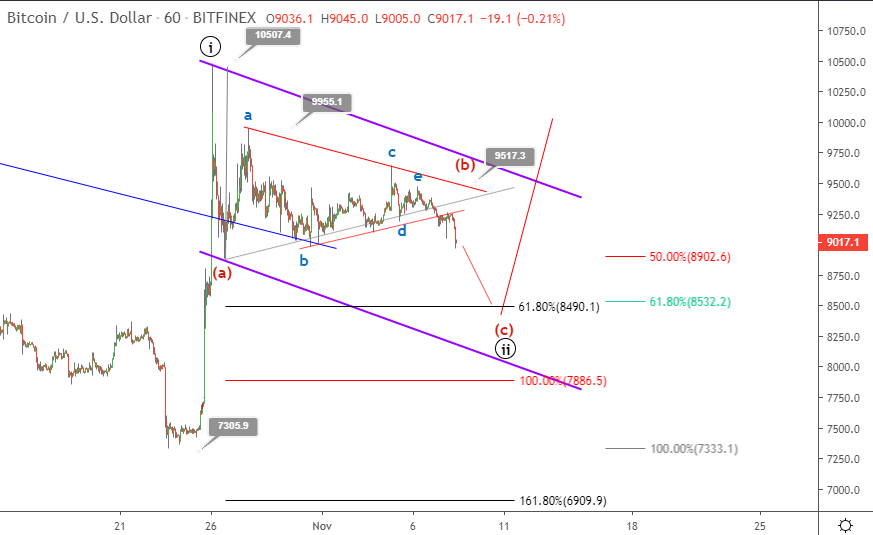 The price broke below the wave b-d support of the triangle to confirm the end of the wave e of (b) triangle. Wave (c) is expected to continue to $8,500 where we have a confluence of important Fibonacci levels. The second target level is the base of the corrective (purple) channel at/below $8,000. If there are bullish signals at any of these levels, Bitcoin price should advance toward $12,300 and $13,900.

Read Also: How to make a Bitcoin Paper Wallet