Bitcoin has gained more momentum to the upside after it almost hit $6,000 on major exchanges. What next? The following insight is based on the Elliott wave theory.

Since the April breakout, more crypto bulls have surfaced. Though they use different tools (mostly technical analysis) to gauge price moves, there has been a slight change to their biases. They are now more confident that prices have already bottomed though suggesting that a fast pullback could happen before the next series of rallies surface.

One of the most popular crypto technical analysts Willy Woo suggests that at 95% certainty, Bitcoin has bottomed at $3100 and is ”unlikely to break below past lows”. With his on-chain volume analysis, he personally believes $4300 was the breakout point of the current rally and will be remembered like that in the near-term future if the current run developed into a big bullish phase. However, he explained that price needs to be validated with the ”on chain volume mooning” happening in the next 1-2 months. 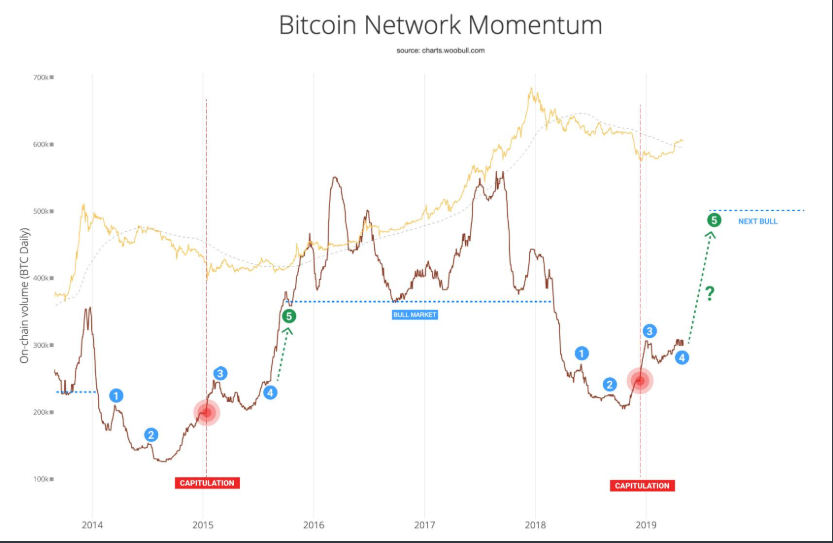 According to his on-chain volume chart above, the process of ”capitulation” has already commenced. This is similar to the one in 2015 that preceded the last bullish trend to nearly $20,000. The bullish phase will commence properly if the on-chain volume reads over 500,000. In price terms, a deep rally into the $7500-$8500 zone is the first confirmation of the next bullish trend. How does Woo’s on-chain analytical tool measure up with conventional chart and price pattern analysis? Let’s look at the Elliott wave theory. 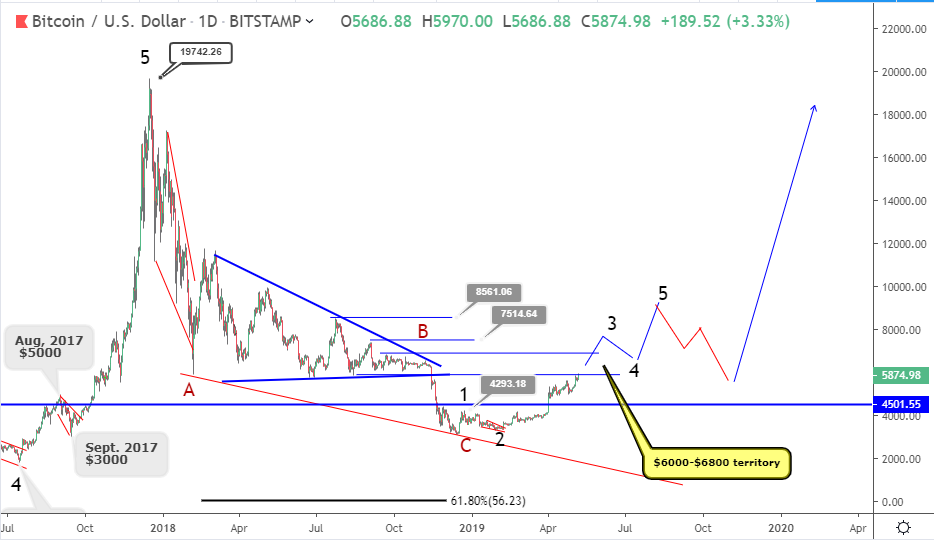 From Elliott wave perspective, the corrective phase could have ended at 3100 with a simple zigzag pattern. The first confirmation is a bullish impulse wave into the 7500-8600 territory. Price should pierce 6000-6800 zone but 5900-6100 could act as resistance zone and leading price to slow down a bit before breaking upside. If the impulse wave is properly formed, a 3-wave dip of the same degree could follow below $6000 before the bullish run resumes to test $19,800 all-time high. On the other hand, if the price is heavily resisted at 6000-6800 and a heavy drop below 4300 happens, the bearish run will most likely resume.