Bitcoin has gained further on Tuesday to move closer to 100% gain since the low recorded in last December.

April 23, 2019. AtoZ Markets – The flagship cryptocurrency has continued the 2019 gains. In 2018, the cryptocurrency dropped about 85% to hit $3100. In 2019 however, the picture is looking different as the bulls maintain a big resurgence which is widely expected to lead to the next bullish phase. Since the last low of $3100, BTC price has gained 78% to hit its highest price in the last five months.

The entire crypto market has added over $50 billion in 2019 and over $6 billion in the last 12 hours. This is according to data from Coinmarketcap. In the last 24 hours (as at the time of writing), BTC has gained over 5% which is above the average of the other nine cryptos in the top ten. Only Cardano has done better with a 6% gain. Bitcoin still maintains 50% market dominance with $98 billion market capitalization. Despite the resurgence, the price still has a long way to go. Total market capitalization is nearly $185 billion which is still far from the all-time high of $835 billion recorded in early January 2018.

Traders and investors were still very cautious despite the rally between January and March. However, the April resurgence has probably lifted optimism among them. BTC currently trades at its highest price in the last five months including over 35% gain in April so far. Price is currently trading above $5,500 and just a swing away from $6000 psychological level.

Peradventure the current rally leads to a new bullish phase with a break above $19,800 all-time high, what is the next target? The co-founder of Morgan Creek, Anthony Pompliano, has made a projection. Pompliano, a popular crypto bull, tweeted that Bitcoin could increase 20-50 times in the next five years. 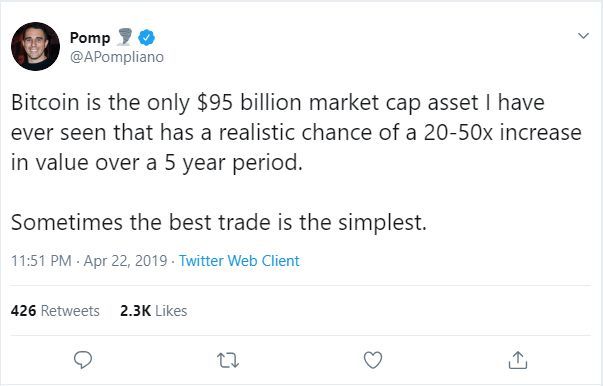 Pompliano believes that big companies will continue to build products in the crypto industry. He believed that the industry is doing very well. He once predicted that Bitcoin will out-perform the S&P 500 in the next ten years

The CEO of the firm Mark Yusko also made a projection of 2000% in the next ten years for Bitcoin. Meanwhile, some analysts believe that Bitcoin will fulfil its potential while many cryptos would go into oblivion. 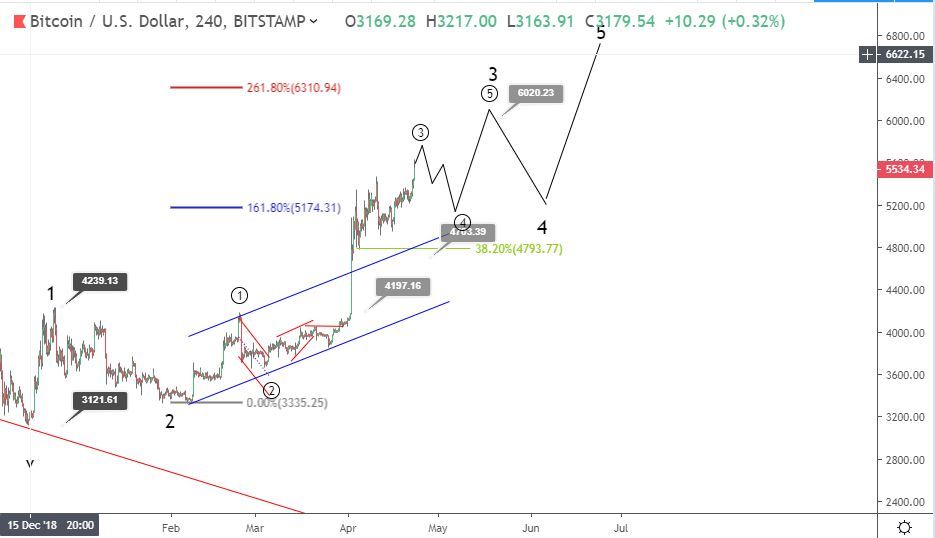 Using Elliott wave technical methodology, an impulse wave is happening to the upside. This shows that price will very much likely continue upside. If the impulse wave continues as expected, further upsurge into the 6,000-7,000 territory should happen. A big bearish corrective dip to 5,000 could happen afterwards.

What do you think is the next target for the next bullish phase? Please share your thoughts with us in the comment box below.