Bitcoin has hit a new high in March and its highest since the last four weeks. What is the next bullish target of the cryptocurrency continues upside?

March 29, 2019. AtoZ Markets – Bitcoin price has progressed steadily in March after another fast dip in late February. At the beginning of this month, the BTC price was around 3600 but an 11% growth has followed and is now a little above 4000. Most traders are often aware of round numbers. After price was supported above 3000 in December, talks of bearish bottom at that level was loud. If the 4000 break is successful and sustained, a visit to 5000 is automatically the next line of thought.

The 4000 price level has acted as a strong resistance this month. This is the third time price is attempting to hit above after failed attempts on 16th and 21st. The bearish pressure is not finally off and it’s very clear that price moves are still largely influenced by the sentimental market forces. The huge triggers are not here yet. However, if 4000 is cleared this time, the bulls will attempt to take prices to the highest since December 2018. The fundamentals are in favor of the crypto market although the big effects are not there yet.

How far has cryptocurrency gone with mass adoption?

One of the major concerns of crypto project developers and investors is adoption. Will cryptocurrency be adopted like fiat currencies? However, have been some good developments on adoption this month. Recently, we reported the plans of the government of Innisfil town in Ontario to adopt Bitcoin as a payment gateway for property taxes payments. Innisfil is joining US state of Ohio, Venezuela, South Africa and few others to adopt cryptocurrency as a payment option. Last week, WooCommerce with over 3 million web users adopted Ripple. The mass adoption will not come overnight but with time, it could happen. However, before the big triggers move in, crypto prices will continue to be driven by the demand-supply battle among speculators.

Bitcoin price has been developing well into recognizable Elliott wave and technical patterns. In the last update, we expected the next break above 4065 minor resistance to be followed by further rallies to 4190 and other upper resistance prices. The chart below was used. 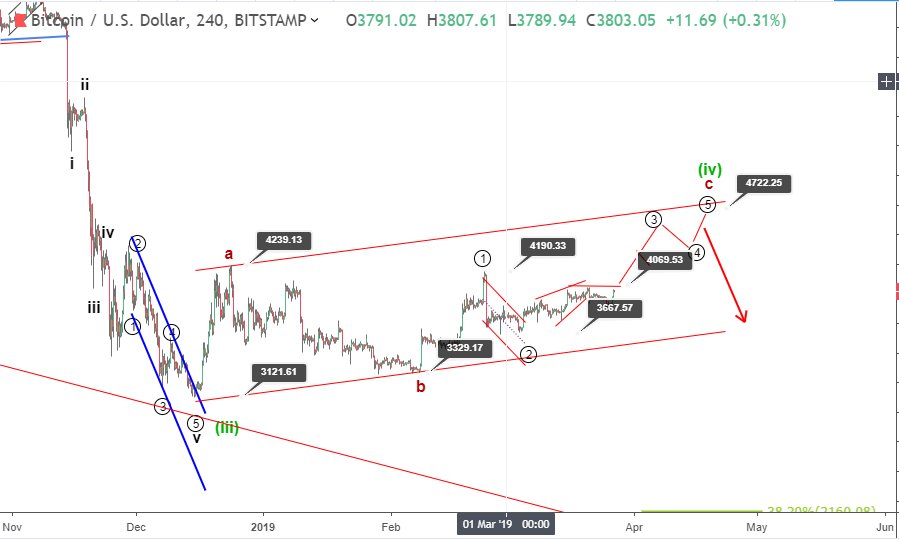 A zigzag pattern from 3121 is developing. Wave c of (iv) could end as an impulse wave or an ending diagonal pattern. Price has revisited the 4069 resistance once again as the chart below shows. 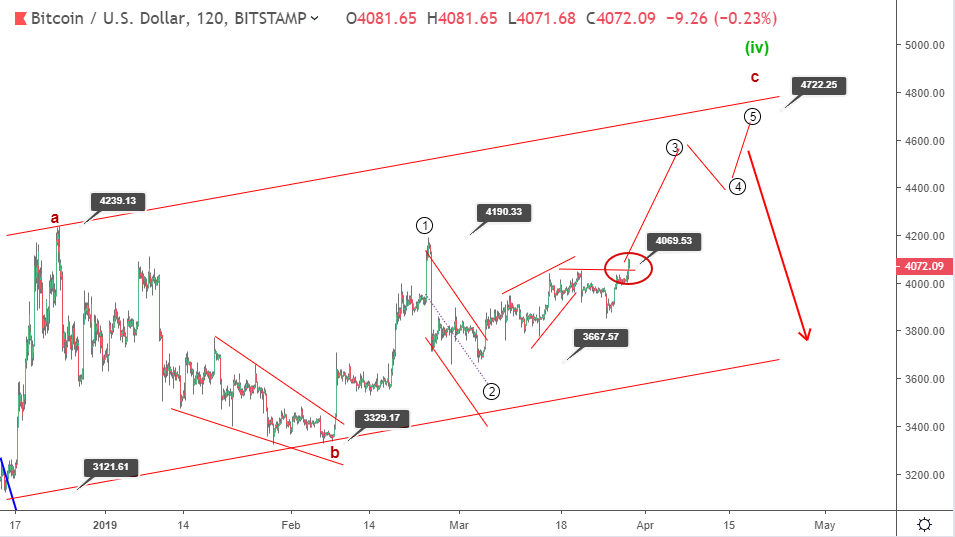 If the breakout is sustained, further rallies should be seen toward 4190 February high and 4239 December high.