Bitcoin is currently stuck between $10,800 and $10,400 awaiting for the next trigger. The following technical analysis is based on the Elliott wave theory.

September 5, 2019 | AtoZ Markets – Bitcoin was approaching $11,000 on Thursday before dropping to $10,400. The flagship cryptocurrency will most likely touch $11,000 in the coming hours or days. After a bearish run from late June to the end of August, BTC has started a bullish run in September. It peaked at $10,800 on Wednesday before dropping slightly to $10,550 where it’s currently priced.  Today’s market activities have been quiet and range-bound. Meanwhile, the entire crypto market has added about $30 billion in September so far.

Bitcoin dominance keeps on increasing with some investors now considering it as a safe-haven asset. Despite a wild bearish run in most of the Altcoins, BTC maintains a steady and shallow decline from the 2019 peak of $13,900. Overall, Bitcoin has returned 160% in 2019 and 225% since December 2018 low. With its growing influence, it now makes up 71% of the entire crypto market value. After the rally to $13,900 in June, BTC completed a big bearish hammer candle pattern. It was expected to be the start of a bearish correction or bearish sideways move. Price seems to have chosen the latter and went sideways spending most of its time between $12,500 and $9,100. A breach of the $13,900 to the upside is expected to see the bullish trend off to $22,500 and $35,000 Fibonacci levels as the chart above shows. What sideways pattern is emerging?

In the last update, we identified the sideways move which has lasted for over 9 weeks, as a triangle pattern. The chart below was used. Wave (d) is not yet complete. BTC price is expected to hit $11,000-11,100 as the next target. If the price is resisted at the diagonal line, we might see a decline toward $9,600 before the breakout happens as the new chart below shows. 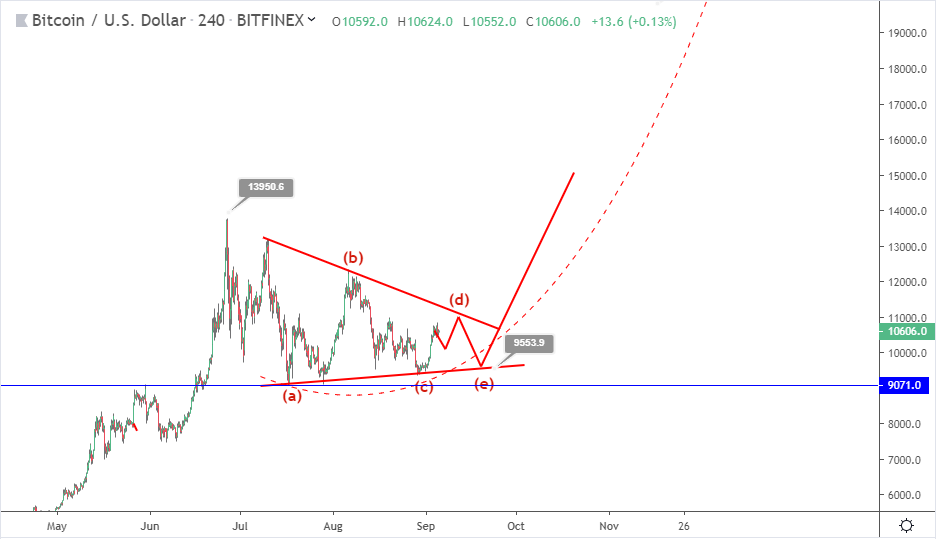