Bitcoin hit a new low at 3200 making the third low in less than a month. Will price bottom at $3000 and its neighbourhood or will go much deeper?

December 11, 2018 | AtoZ Markets - Probably, the most asked question about Bitcoin now is : 'when will price bottom?'. This year has seen another bearish cycle which has resulted in more than 80% decline in most (if not all) cryptocurrencies. Most people believe if bitcoin should come back, others will follow, thus the biggest attention is on the king of Crypto which still holds more than 50% dominance of the entire cryptocurrency market. Since the November bearish breakout, Bitcoin has hit fresh lows four times- 5200, 4000, 3500 and 3200. 3200 was hit last week as it now seems that every new week will come with a new low. However, despite the pessimism and the bearishness of the market, many still believe price will bottom sooner than later. The idea of 'Bitcoin is dead' because of the 2018 bearish move has already been debunked - for now anyway. But, when will Bitcoin bottom? At $3000, higher or lower?

Bitcoin is not new to huge bearish moves. In its short life time, it has seen 2-3 other big bearish moves prior to the current one. However, it came back stronger to make higher highs. Of course, it's not guaranteed that it will return upside this time around but the chance is real. If it does return upside, where will it bottom? That's a very difficult question to answer but not impossible. Let's use the Elliott wave theory to study Bitcoin price behavior.

This forecast is an update of the 30th November technical analysis where we used Elliott wave theory to check how price should behave after bottoming. There are none of those signs yet as price dipped further to make new lows. Looking at the price chart, the price pattern after breaking out of the 9-month triangle pattern suggest a bearish impulse wave leg is happening. The bearish impulse wave was expected to end around 2500 before a bullish push. Price is currently at the top of the June/July 1500-3000 price support zone. If price should enter this zone, we will most likely see a dip to 2500, 1800 or 1500 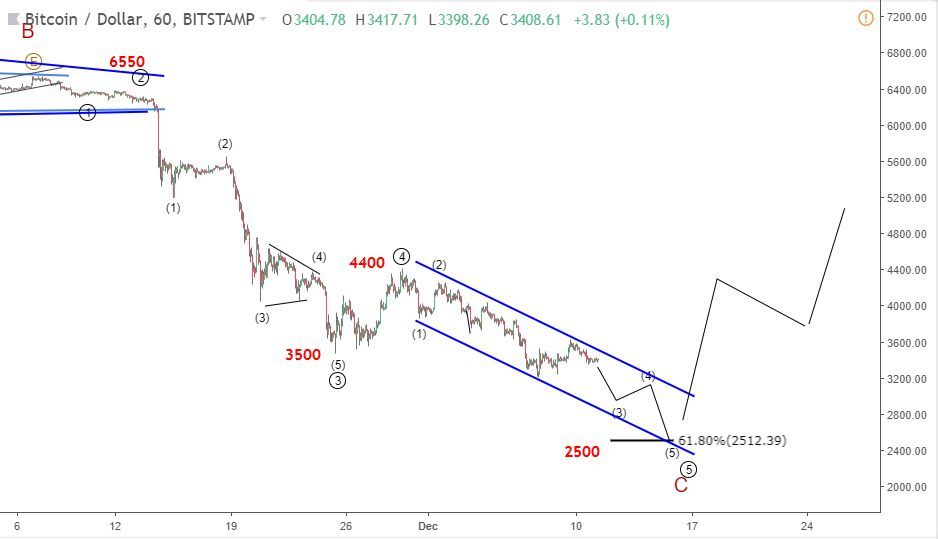 From 6550, the fall is emerging into an impulse wave to complete or as part of the last leg -wave C- of the year-long bearish correction. The 5th sub-wave if within a falling channel. Price is still well supported above 3000. A dip below 3000 should see a hit of 2500 which is an important Fibonacci price support level. A big bullish breakout of the falling 5th wave channel should be followed by at least a 3-wave correction to 4400-5500. If the bullish move continues to $6000 and breaks above 6550, there is a big chance that a bottom has been reached. Below 2500, there is 1800 and 1500 to act as support levels in case of further falls.