Bitcoin quickly dropped nearly 15% on Wednesday before making a slight recovery. The following technical insight is based on the Elliott wave theory.

The crypto exchange Coinbase had a brief shut down late on Wednesday. The outage occurred across its website,  mobile apps and API. Despite the degradation, its internal system looked functional. The company later announced on its website that the incidence has been resolved. All these happened in less than an hour. Prior to the incident, Bitcoin was trading roughly at $13,700 after hitting $13,900 earlier in the day. The sharp fall dragged the premier cryptocurrency to $11,800 losing $1,900 in the process.

Currently, BTC exchanges for $12,300. Despite the sharp fall, it maintains a gigantic market dominance of 62.8% over the aggregate of the altcoins as they couldn’t come close in terms of performance in July. The increase from 56% to 62.8% in less than a month is something to ponder. The king is back!

It’s very difficult to go against BTC at the moment. However, as one would expect, the price will make a big correction of the current bullish trend at one point or the other. A bearish correction below $10,000 and even to $8,500 could happen. To the upside, however, no level is difficult to break by the current bullish speed. The next two resistance levels are the $17,100 and the all-time high at $19,800.

From the perspective of the Elliott wave theory, Bitcoin is at the 5th wave of a bullish impulse wave from $3,100 as explained in the last update. The expected reversal levels were the 50% and 61.8% correction of the 2018 bearish trend at roughly $11,400 and $13,400 respectively. Price has hit above the two levels but there is no reversal pattern yet. 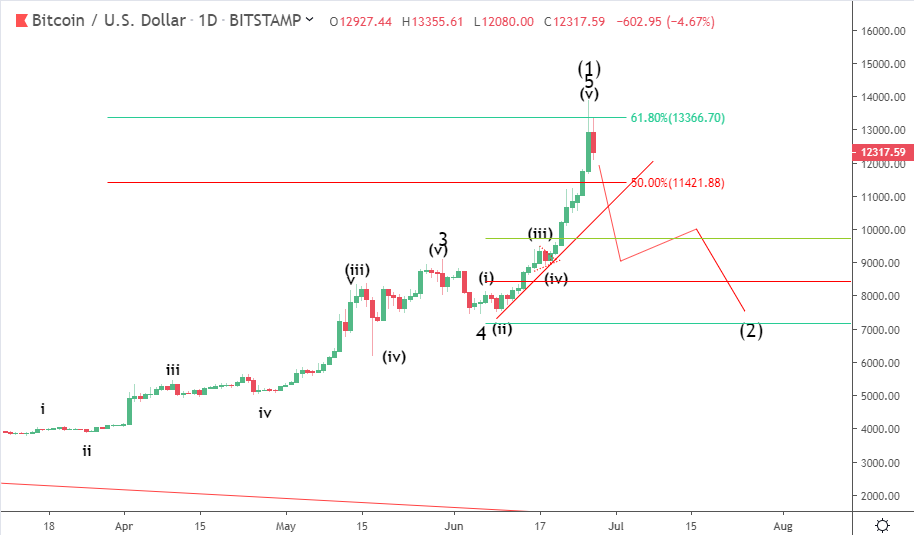 If the current dip continues below the wave (v) trendline, we might see a 3-wave dip to $8,000 or even $7,000. If the price stays above the trendline, more rallies could be seen.