Bitcoin has been largely dominating over the Alts in 2019. Is the story about to change? The following includes Bitcoin price prediction based on the Elliott wave theory.

August 22, 2019 | AtoZ Markets – Bitcoin and altcoins have been on the decline since late June. While there was a push upside last week, the dip continues on Tuesday. Bitcoin now trades below the $10,000 psychological level for many hours with eyes on the $9,500 support level. If the $9,500 and $9,100 support levels are breached downside, it’s most likely that BTC will hit $7,500 before August ends or in early September.

Bitcoin dominance: a call for concern for Alts?

While Bitcoin and some altcoins have done well especially in the first half of 2019, there are concerns as to the increasing Bitcoin market dominance. At the start of 2019, Bitcoin had a 55% or less of the total market share. That has increased to a whopping 69%. Ripple, for example, has done poorly after making no positive gain in 2019 so far. The third-largest crypto dropped to its lowest price since late 2017. Cryptos like EOS, Cardano, Monero and Stellar which started 2019 with great performances have also retarded significantly. Many of the coins outside the top 20 are already close to death. Many might not survive further price fall. Some altcoin traders are already feeling the heat. One of them tweeted that she lost $242,000 after buying and holding altcoins for less than 2 years. 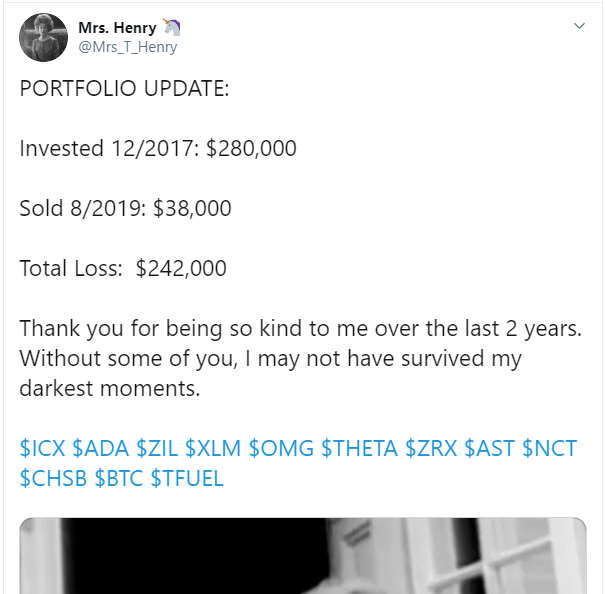 That was not good timing anyways. However, if the same was invested in Bitcoin, the loss would have been far lower. $280,000 invested in Bitcoin in November 2017 would be worth $178,000 which is about $101,000 loss. This shows that Bitcoin has dominated over the market at the expense of Altcoins.

Meanwhile, another Crypto trader on Twitter believes the gap between Bitcoin and Altcoins will soon close up. The Tweet by the handle @paddystash used technical analysis to analyze Altcoins market dominance. The chart below, as used by him, showed the cyclical behaviour of how Altcoins have performed in the bigger market picture.

The chart shows that there could be a lift if the previous behaviour at this diagonal level is to be considered. The Alts currently share about 31% of the market share among themselves. That might change soon and return to 70% or more according to the chart above. This means that Altcoins will perform far better than Bitcoin in the last 4 months of the year and a large part of 2020. However, if the trendline is breached downside, many altcoins will die completely.

The crypto market is still in a corrective phase. The Bitcoin chart below can be used to measure how far the dip has gone and how farther it could go. 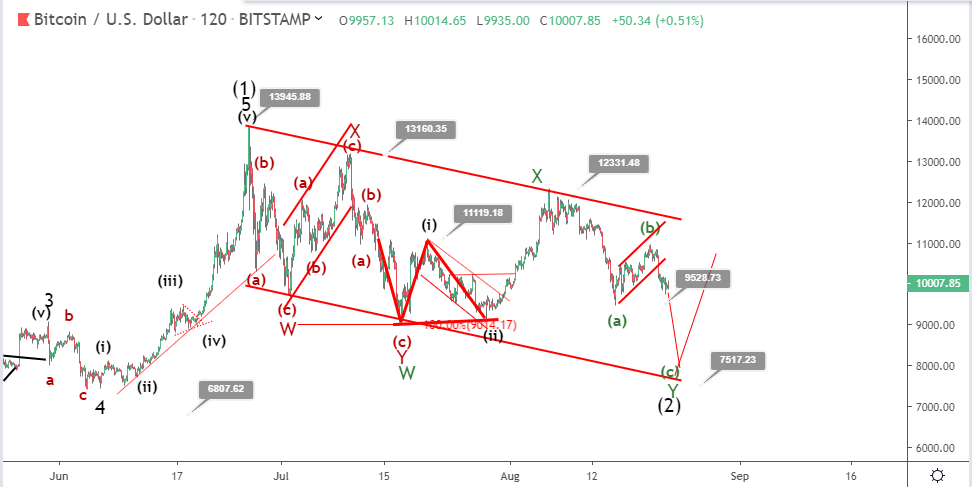 The chart above is very similar to what we had in the last Bitcoin update. Wave (2) is still ongoing and currently completing a complex double zigzag pattern. The dip is expected to continue to $7,500-7,200 critical zone. Wave (3), however, will have will most probably lead to a new all-time high.