Bitcoin has returned to $12,000 to make another breakout attempt. Will there be a surge above? The following Bitcoin price prediction is based on the Elliott wave theory.

August 08, 2019 | AtoZ Markets – The world’s most valuable cryptocurrency is gradually recovering from the slump that happened from late June to July. The digital money broke above the $12,000 mark on Tuesday but couldn’t sustain the move. It eventually dropped to $11,200. Currently, another attempt is being made to overcome the $12,000 hurdle. Bitcoin accounts for over 68% of the value of the entire cryptocurrency market. A week of positive run could still be followed by another week of a slump but BTC has a real opportunity to build on the current rally. The current political atmosphere is in favor of the premier cryptocurrency.

The reasons Bitcoin could gain more

Bitcoin as a ‘safe haven’

Bitcoin is fast gaining a reputation as a ‘safe-haven’ asset. This means that investors can now withdraw from the traditional markets, which are currently unstable and invest in the digital asset. Meanwhile, this may be exclusive to Bitcoin and perhaps few other cryptos as is evident in its current market dominance. The rising trade tension between the US and China, the Brexit uncertainties and of course the recent bank rates cuts could lead to an influx of investments in the coming weeks and months. Financial instruments perceived as predictable or more stable will benefit from the current situations. This is evident in the rising prices of Gold and Yen. These are theoretically sound but not cast on stone.

Options of diversification for investors

Aside from being capable of being a safe-haven asset, its volatility can also be harnessed by investors who want to diversify to risky assets. Therefore when the main markets are falling or underperforming, Bitcoin will provide another viable option for them.

Bitcoin has the characteristics to compete fiecely with Gold or even overtake it in the coming years as the world gets more digitized. It has a store of value and is rare. With the Bitcoin ‘halving’ coming, it will even be more scarce. Halving is a feature that reduces the reward of mining of a cryptocurrency with the expectation that its scarcity will increase its value.

Bitcoin could hit its all-time high before the year runs out. Once its price breaks away above the $13,900 2019 top, there are very little barriers on the way. 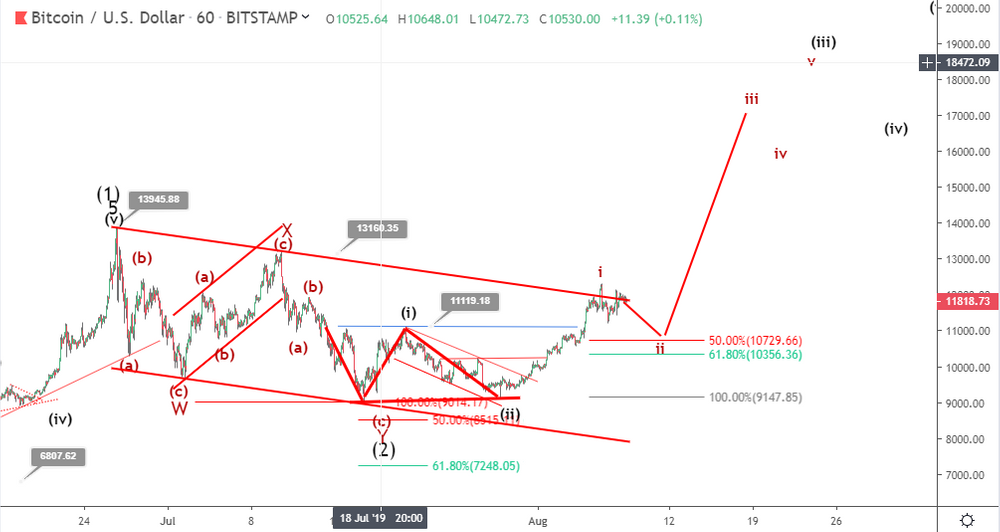 BTC could drop further to complete the minor wave ii at any price between $11,100 and $10,300 before the huge bullish breakout happens to $17,000 and then the all-time high thereafter.