Bitcoin broke downside on Wednesday and continued lower yesterday. What are the next levels to watch out for. Will price rally soon? The following looks at the technical side.

After so many months staying above $6000, Bitcoin finally broke below it to make a new 2018 low. Price is currently stabilizing below $5600 as trade volume drops today by almost $500 million. Market capitalization still stays below $100 billion. Bitcoin still maintain its huge market dominance at 52% according to CoinMarketCap. Ethereum dropped significantly below the $200 mark and Ripple below the $0.5 mark. Ripple has made the biggest recovery so far among the 'big three'.

It's true that no smoke without fire. The sudden drop, though expected, was partly or largely influenced by some or all of these 5 reasons. Many technical price indicators were pointing downside after Bitcoin made several failed attempts to break upside. Price was confined into a triangle pattern after losing 70% of its market values between January and early February 2018. The triangle pattern took about 9 months to complete – it was such a long battle between the bullish and bearish forces. 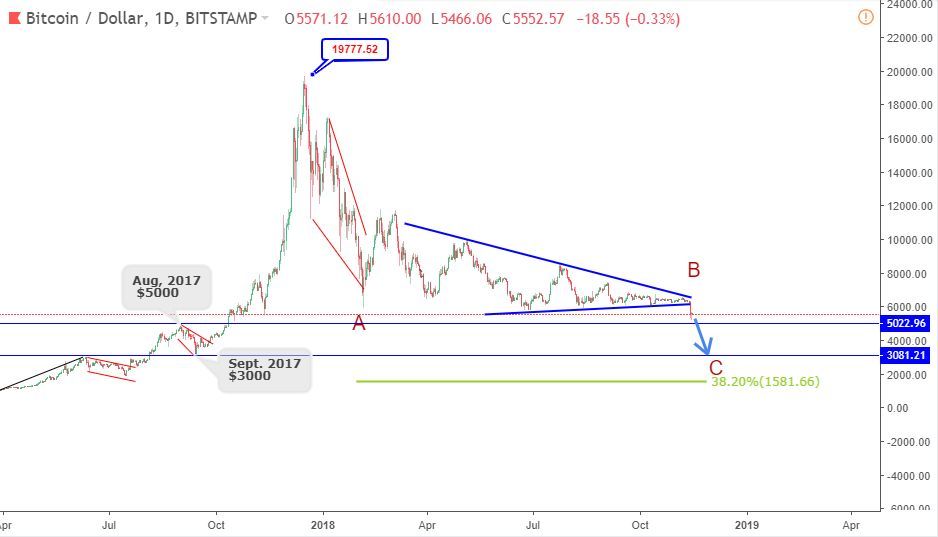 In November-December 2017, Bitcoin gained more than 200%. As the chart above shows, price is entering the pre-November 2017 levels. The two most significant price levels before November 2017 were 5000 and 3000. It seems price would touch these levels before the year ends if the bearish pressure persists. After hitting $5000, price might enter another sideway move before the next drop to $3000. Unless a big bullish spike happens, the near-term direction is still bearish and might continue till the end of 2018 or even Q1 of 2019.