Bitcoin is effectively supported above $10,000 with a rally to or above $11,000 very likely. The following technical analysis is based on the Elliott wave theory.

Bitcoin market dominance has dropped in the last 48 hours, from 71% to 69.8%. The entire market cap is not far from last week average. Clearly, it can be seen on the chart the bull-bear battle is getting narrower. A massive breakout is near.

Just as the BTC price narrows down, the hash rate is jetting off to set a new record. According to an earlier report, the BTC hash rate has surpassed 94 quintillion hashes/second and might hit 100 quintillions for the first time ever.  Hash rate is the measuring unit of how fast the Bitcoin network processes transactions. It’s one of the parameters miners use to calculate Bitcoin mining profitability. The hash rate usually has a direct correlation with the Bitcoin price. This means that more often than not when the hash rate rises, the Bitcoin price rises as well. It remains to be seen how the BTC price will respond given that it has been in a sideways bearish correction since late June. Will there be a bullish breakout soon?

In recent updates, we identified the dip from June as a sideways triangle pattern after BTC retraced from an amazing bullish run in the first half of 2019 (rose from $3,100 to $ 13,900). 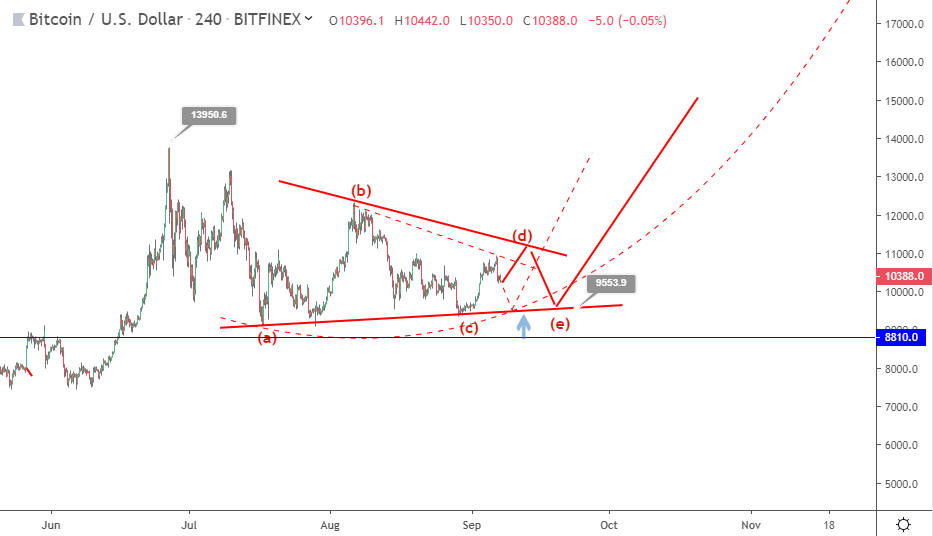 In the last update, we used the chart above to measure the position of the triangle in the bigger corrective phase. In the update below, we take a closer look at the two most likely scenarios.

The chart below shows the entire dip from 13,900 2019 high completing a triangle pattern with a preceding bullish trend. 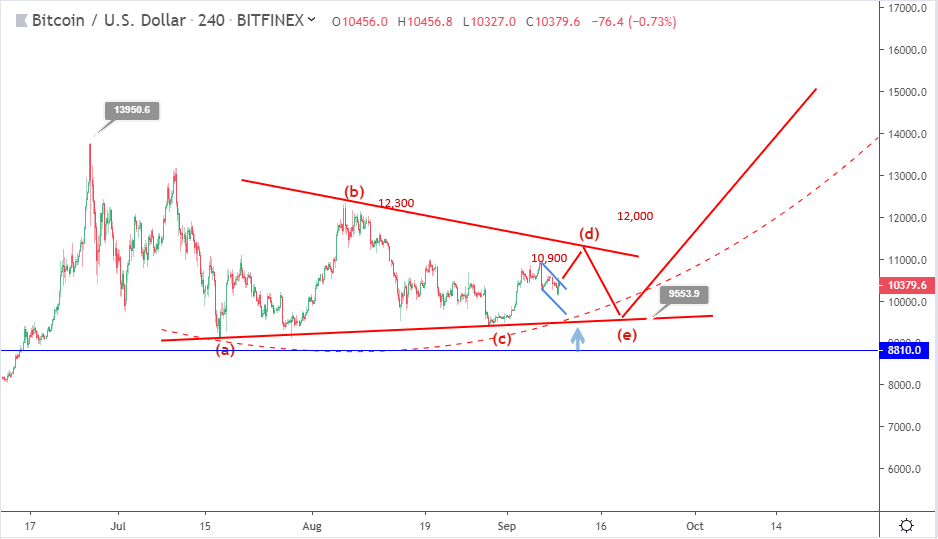 The chart below identifies a possible triangle pattern as part of a larger bearish double zigzag corrective pattern to a lower price. This pattern is less close to a triangle than the first scenario. However it moves, if BTC bull continues to be limited below $12,000 and the price eventually drops below $9,100-9,300 support zone, the bearish correction from $13,900 will most likely continue to 7,000-7,200 support zone.